Shi Davidi of sportsnet.ca has recently reported that the Jays will be looking at trade options before looking at the free agent market. This is backwards of the strategy that I believe would be successful, but I digress. Two of the names that Davidi mentions are Cubs starter Jeff Samardzija and Reds catcher Ryan Hanigan. Davidi also mentions interest in Astros catcher Jason Castro, but this rumour has been debunked as Astros GM Jeff Luhnow has made it clear he is not willing to trade his young All-Star catcher.

What would it cost to get him? The Cubs have a very good farm system in the way of position players, but are a little lacking in pitching. This means one of the Jays 1A and 1B prospects, Aaron Sanchez and Marcus Stroman, would likely have to be included in the package. The Cubs would likely ask for a lower ranked prospect as well. Is Stroman or Sanchez worth it? Sanchez has huge front of the rotation upside and could provide amazing value for the Jays if he figures things out and can consistently command his pitches. There’s also a chance he just ends up being a reliever with good stuff, but sub par control (Jeffress for example). Stroman has a smaller ceiling, maybe a #2 starter if everything works out, but I believe he also has a better floor. His floor is probably a late inning reliever out of the pen as a set up man. It’s a risk vs. reward type of situation with these two. The trade may not be worth including one of these two if the Jays don’t go anywhere in the next two years. Stroman may even provide average or just below average starting pitching for the league minimum in this time span. The only way this trade would make sense for the Jays, is that if Samardzija would sign an extension with the Jays that is somewhat friendly (AA’s greatest ability in my mind). If the Jays can lock him up past his free agency year, it would make some sense for the Blue Jays but, as with any trade for a prospect, you could end up trading away a young controllable asset that figures it all out.

Ryan Hanigan was the other name mentioned by Davidi. If Ruiz or McCann is off the table, Hanigan might make a lot of sense for the Jays. Arencibia is as good as gone after his abysmal season in 2013 and partially talked his way out of town with Dirk Hayhurst and Gregg Zaun. Hanigan is the anti-Arencibia. Hanigan consistently has walks rates north of 11% with excellent an OBP and strikes out less than he walks. Hanigan does not have much power however, he has never hit more than 6 home runs in a season and his SLG generally hangs around or below his OBP. Hanigan is also good defensively, and definitely an upgrade over Arencibia. He has 8 runs saved from throwing out base stealers over the past two years and has always been above average at “fielding” on FanGraphs. Some recent studies also show that Hanigan is an above average pitch framer. Arencibia improved his pitch framing this year and was above average as well, but it is unlikely that Arencibia would be better than Hanigan going forward. Hanigan is an intriguing option if some others are off the table. He is projected by Steamer to have 2.3 WAR over 102 games in 2014, where Arencibia is only projected at 1.0 WAR. 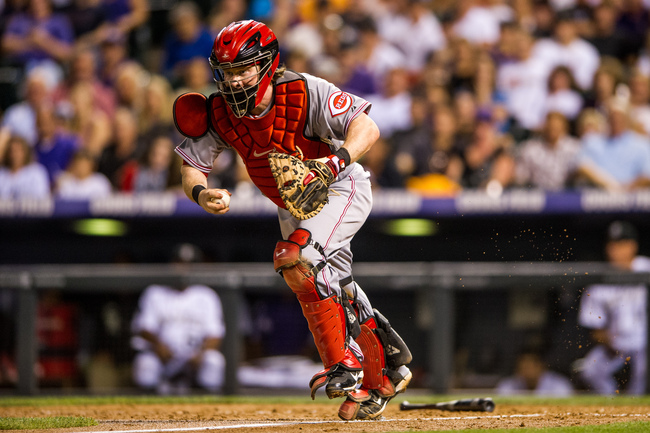 Hanigan is set to be a free agent after next year and is currently 33 years old. If acquired, an extension might depend on the play of A.J. Jimenez next year. Jimenez might prove to be a starter or he might be better served as Hanigan’s (or another catcher’s) backup in the long run. Hanigan is known to be available after the Reds signed Brayan Pena, leaving Hanigan the odd man out in Cincinati. The cost of acquiring Hanigan should not be that steep either. With Wieters (trade), Ruiz, McCann, Saltalamacchia, Navarro, Jose Molina, Pierzynski, Buck, Soto, et al. all available for just cash, the catcher market is very saturated. In the laws of supply and demand, if there is a lot of supply and less demand, the price goes down. This is likely to be the case with Hanigan. He would likely not cost anything too substantial or crippling to the Jays. With Aroldis Chapman potentially heading to the rotation, the Reds may be interested in one of the plentiful Blue Jays bullpen arms. I could see a deal with Cecil for Hanigan or Janssen for Hanigan making sense for both teams.

What is Jose Bautista Worth?