Home » Featured » The Other Guys 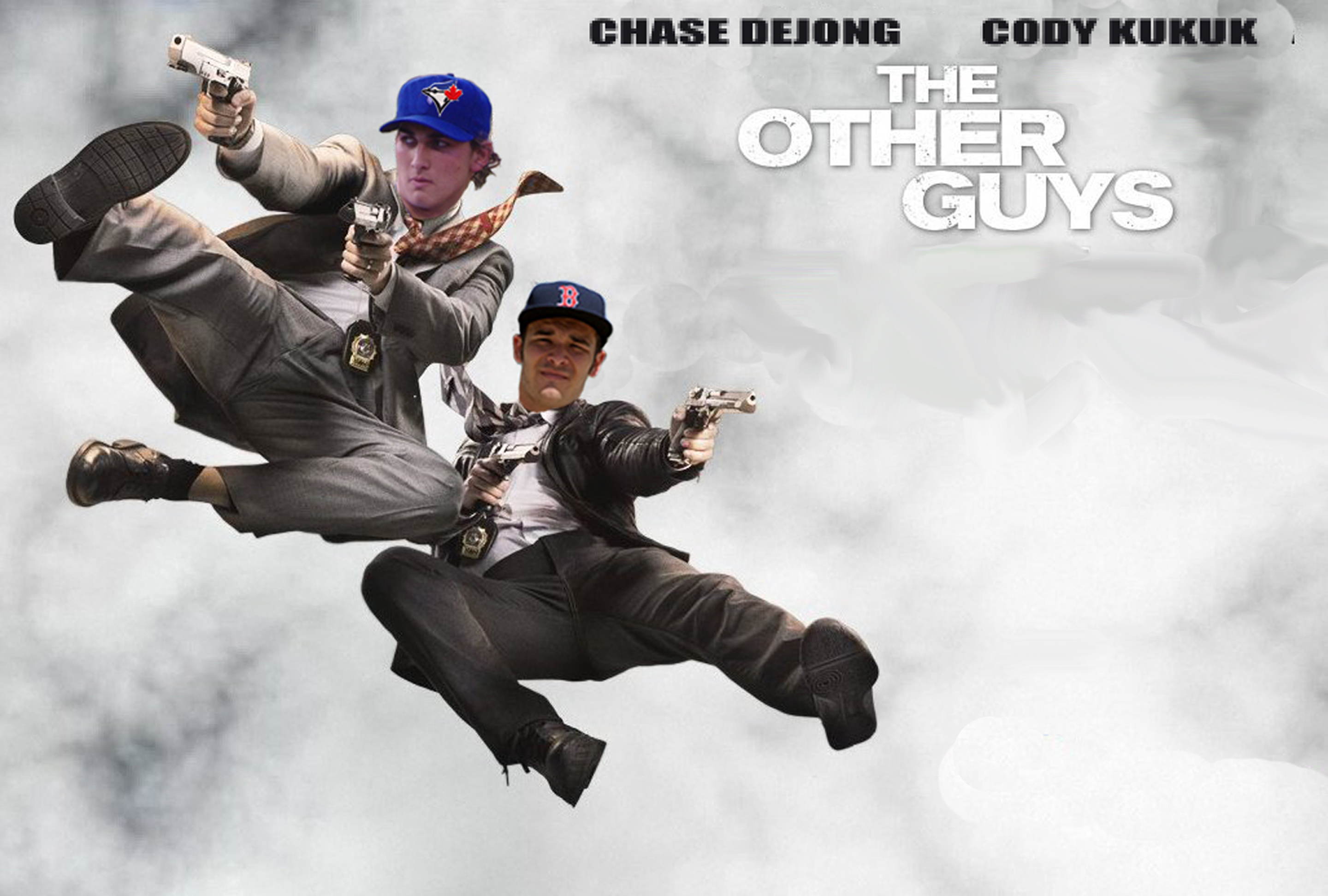 T
he offseason isn’t even fully underway yet and already the Hot Stove is heating up with the list of prominent names being discussed in trade rumors. David Price and Max Scherzer, Elvis Andrus and Troy Tulowitzki, Matt Kemp and even Toronto’s own Jose Bautista’s values are being gauged on the open market, if we are to believe certain reports. Whether or not any of these players actually move is difficult to predict, but what is certain is the price they are likely to command in any trade.

Last off season Price’s former teammate James Shields was acquired by Kansas City in exchange for a package of prospects which included eventual AL Rookie of the Year winner Wil Myers. Similarly, if Price or any of the other aforementioned players are to be traded this offseason, it will likely come at the cost of the acquiring team’s best young talent.

Who might those players be? Well, the average fan can probably rattle off a list of the prospects they would want to headline any potential deal; the blue chippers; the big names. Thanks to the internet and publications like Baseball America and Baseball Prospectus the top ranked prospects in every teams’ farm systems are known to even the most casual of baseball fans. But what about the other guys? The players who do not appear on all those top prospect rankings, and end up being final additions to a trade; the “throw-ins” as they are sometimes referred to. These are typically your A Ball or Rookie League players; recently drafted; raw or unproven. Which unheralded prospects will rival GMs be looking at to be the crucial final piece of a trade this offseason?

To answer that question I decided to examine every teams’ minor league system to find that one player, not commonly ranked among their organization’s top 20 prospects (according to MLB.com or Baseball America), who could end up being a diamond in the rough. I will begin today by taking a look at baseball’s most competitive division, the American League East.

Drafted in the 7th round of the 2011 draft Kukuk is a tall and athletic lefty with a fluid delivery that allows him to run his fastball up to 92-94mph consistently and without much effort. He compliments the pitch with a tight low-80s slider that is a potential plus pitch, and a developing changeup that projects to be about average.

Kukuk’s Achilles heel thus far in his career is his command which has been erratic even at the best of times. He averaged almost 7 walks per nine innings in 2013, which is why despite his impressive arsenal of pitches his prospect value is somewhat suppressed. Still, Kukuk is the kind of prospect any GM would jump at the chance to get, because even though he hasn’t put it all together yet, he may very soon. At such an early stage it is possible to imagine a number of different outcomes for Kukuk. He is your quintessential high risk, high reward prospect.

The combination of his long limbs and the deep arm circle in his delivery are reminiscent of lanky Giants southpaw Madison Bumgarner. That could be Kukuk’s ceiling if everything breaks right. However if his command does not improve in any meaningful way you’re probably looking at an Andrew Miller type career arc: multiple failed attempts at remaining a starter before eventually settling in as a hard throwing LOOGY with shaky control.

A third round pick in 2012 out of the same Chipola junior college that produced Blue Jays slugger Jose Bautista, Toles is a premium athlete whose game, unlike Joey Bats, is built on speed not power. A 6.40 runner in the 60 yard dash, his speed plays well both on the base paths and in the center field where he has the chance to be a plus defender with excellent range and a better-than-average arm.

Offensively Toles profiles as a leadoff hitter in the mold of a Michael Bourn or Denard Span; speedy players without much power, who are able to succeed despite less than ideal strikeout to walk ratios. Concerns about Toles usually revolve around how his bat will develop. He has quick hands, and excellent barrel awareness, but his pitch recognition needs work and his swing has a couple of moving parts that need to be ironed out including a hitch and a leg kick.

With Toles you’re basically buying the speed and the defense and projecting on the bat. He’s exactly the kind high risk, high reward talent that teams like to target as throw-ins in a larger trade (see. Anthony Gose).

Santana is different from many of the other players on this list in that he was – and in some circles still is – already a well known prospect. A five-tool player with explosive power and speed, Santana was in the midst of a star making turn in the Gulf Coast League as an 18-year-old when the Dominican center fielder suffered a gruesome ankle injury that has cast a dark cloud over his career ever since. Many scouting publications, even some which had him ranked as high as 6th in the organization pre-injury, didn’t even think to include him in their list of Yankees prospects for 2013 except as an honorable mention.

Santana will have to work hard to prove the doubters wrong. He did not play at all in 2013 and his 2012 post-injury performance in the New York Pen League was not exactly inspiring, as he didn’t hit worth a lick, and hardly showed any of the game-breaking speed that had become his trademark. But at just 21 years old, and hopefully fully healthy, the opportunity is still there for Santana to live up to the once lofty expectations. At his best Santana will flash 60 power and 70 speed. The kind of player who could one day hit 20+ homeruns and steal 20+ bases. Even if the speed-sapping ankle injury he suffered eventually forces him to an outfield corner, Santana has more than enough power and arm strength to profile in right. All he needs to do is to get fully healthy and get back to playing in games and gaining experience.

The Yankees have a ton of outfielders in the system ahead of Ravel including Mason Williams, Tayler Austin, Zoilo Almonte, Slade Heathcott, Ramon Flores, Aaron Judge, and while Santana may have as much if not more potential than any of the players ahead of him, there’s also a realistic chance that he never gets back to what he was. I think that’s the kind of gamble a team trading with the Yankees might be willing to take for a player with such enormous upside.

Small but thickly built Brazilian teenager with a live arm and advanced pitchability. Moreno throws from a straight over the top arm slot, and shows excellent command of two pitches; a fastball that sits in the high-80s to low-90s and a hard slider that has tremendous bite right now and could be a plus pitch in the future.

While Moreno does not ostensibly appear to have much physical projection remaining, he’s more athletic than he appears, and it’s difficult tell a kid at eighteen that he’s not going to get much stronger, or even grow an inch or two over the next few years. Even the natural strength gains that come with maturation should help him work more consistently in the low-90s if not more.

Moreno is certainly an interesting prospect, not the least of which because of his cultural background. He made a name for himself at the 2008 14U Pan American Championship, being named tournament All-Star ahead of more celebrated young pitchers Victor Sanchez and the Blue Jays own July 2 bonus baby Adonis Cardona. Finished the tournament as the leader in ERA after not allowing an earned run in 7 innings to go with 13 strikeouts and no walks. Still a long way off, and might ultimately profile as a reliever, but definitely has the moxie and stuff to go more than one inning.

DeJong was one of my favorite sleeper prospects heading into the 2011 draft, when I became enamored with his combination of polish and projection. Back then he already showed excellent command of at least three average pitches; a fastball in the low 90s, a 12-6 curveball, and a sinking changeup. The stuff was already solid with the chance to possibly jump a full grade thanks to a long lean body that just oozed projection.

With natural strength gains, and the Blue Jays new weighted ball program, which has seen fellow Toronto prospect Tom Robson add a few mph to his fastball and have a breakout year, I would not be surprised to see DeJong throwing consistently in the 92-95 range as early as 2014.

DeJong is certainly not without his warts. He can be a little too hittable at times, and his fastball is pretty straight despite the good plane he imparts. He also has not developed a true swing-and-miss offering, despite the high strikeout numbers. That being said, the best part about DeJong has always been that you can envision him being a whole lot better in a few years for a variety of reasons, and yet he’s already pretty good right now.