Shi Davidi recently reported that The Toronto Blue Jays and Los Angeles Dodgers discussed a Matt Kemp trade during the GM Meetings. Davidi claims that nothing came to fruition, but it is interesting that the Jays would be interested in Kemp’s services.


The idea isn’t believed to have gained any traction at all—Kemp has six seasons remaining on his $160-million, eight-year deal, which is beyond the Blue Jays’ maximum of five-year commitments—but that it was raised at all indicates the kind of bold thinking GMs are engaging in right now.

Davidi mentions the five year policy, but this wouldn’t be a free agent signing. What would have to be included for Kemp? Where would he play? If Kemp would have been acquired, it would likely have cost one of Marcus Stroman and Aaron Sanchez, or some current MLB talent. It is a large contract, with diminishing value based on Kemp’s 2013 season, but there is tons of All-Star potential in the outfielder. 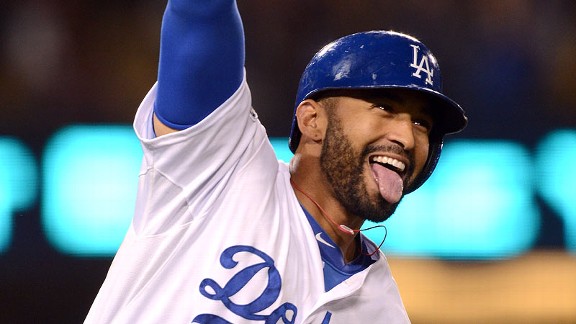 If Kemp was acquired, he would likely man LF, with Cabrera sliding to DH duties with Lind. Does this really make sense for the organization going forward? I don’t think it does, Kemp’s contract is so large and there is the possibility that he continues on this decline. Remember a slugger by the name of Vernon Wells? An outfield of Kemp, Rasmus, and Bautista does appear tantalizing, but it is probably not in the best interest of the organization to trade away prospects with high projected surplus values for expensive contracts.