The first big news of the offseason caught everyone by surprise last night, but it may have just been the latest occurrence of a growing trend in Major League Baseball.

The Prince Fielder – Ian Kinsler swap by Texas and Detroit is a blockbuster by any measure. 56.8 combined career fWAR is changing teams, along with eight combined All Star appearances, three Silver Slugger awards (all Fielder’s), three 20/20 seasons (all Kinsler’s, obviously), and 230 million dollars in contractually guaranteed money. Below is an asset comparison, so we can see which team “won” this trade on paper. For both players, their 2014 WAR is simply their Steamer projection, and subsequent years are adjusted for decline since they are both past their probable physical prime. Kinsler goes down by 0.5 WAR per season, the standard decline, while I decided to knock Prince down by 0.6 WAR per season because there is fairly convincing evidence that “big” players tend to age worse than normies. 0.6 WAR is admittedly an arbitrary number, but I think I leaned towards to side of caution. 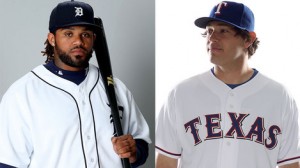 Note: If Kinsler’s option in 2018 is picked up for 12M, instead of him being bought out for 5M, then his projection becomes 13 fWAR over 5 years at a cost of $99M. That’s a cost of $7.62M per win, which represents slightly better value for Detroit than if he were to be bought out (essentially they would add on 1.6 wins in 2018 for 7 million dollars).

Despite 30 million dollars worth of Fielder’s contract being paid by Detroit, it looks like his price tag will still be too high for Texas to come out on top. In a nutshell, the edge would go to the Tigers on this one… but we’re not in a nutshell. There’s more to it.

Texas scrapes some significant auxiliary value off the bottom of this transaction by trading a surplus for a need and opening up some room for a pretty special young player. They had three major league quality middle infielders before this trade, Elvis Andrus, Jurickson Profar, and Kinsler, and their projected lineups had one of the three starting the season at first base or DH. Prince Fielder can hit a lot more than any of those three skinny infield guys, and Texas no longer has to waste serious defensive skills at a 1B/DH position. They’ve also finally created room for the wunderkind Jurickson Profar to really spread his wings and soar, a move that definitely carries some very hard to quantify long term monetary value. So there’s a lot more going on here for Texas than a $ / projected WAR calculation, but the same can be said for Detroit.

The Tigers didn’t need an outside-of-the-nutshell reason to justify this trade, but they still have some pretty good ones. For one thing, this swap defines a pretty drastic infield overhaul in Detroit. Back to back undeserved MVP winner Miguel Cabrera can move back to first base after two fairly ugly defensive seasons at the hot corner, and his replacement at third will probably be Nick Castellanos, at least initially. Castellanos is no Jurickson Profar, but he has been a highly ranked prospect (#21 overall by both MLB.com and Baseball America before 2013). He was not a particularly well regarded defender at third base before moving to an outfield corner last season, but with a sub – .800 OPS in AAA last year, his bat might not have played in an outfield corner anyway. Going back to third base will at least give him a slightly elevated chance of sticking in the big leagues, and with Cabrera moving back to first, Detroit could be reducing some of the future wear-and-tear on their franchise player’s body. There’s value in all of this, and there’s also value in catching baseballs. Detroit started 2013 with a left to right infield of Cabrera, Jhonny Peralta, Omar Infante, and Prince Fielder. These 4 players have a combined career UZR/150 at these specific positions of -12.6. The new Tigers infield of Castellanos, Iglesias, Kinsler, and Cabrera should catch a lot more baseballs. We don’t have good defensive sample sizes on Iglesias and Castellanos, but Iglesias is a wizard at shortstop and it’s hard to imagine Castellanos being worse at 3rd than Miguel. Cabrera is also a better defender than Fielder at 1st base, and Kinsler is a pretty solid second baseman who has flashed serious defensive chops in some previous seasons. Rick Porcello might sleep better next summer.

Since Detroit and Texas both enjoy some hard to quantify auxiliary benefits in all of this, I think it’s fair to say that the Tigers come out on top, whether we’re looking at this from inside or outside the nutshell. Even with 30 million dollars kicked in by the Tigers, that’s still a hefty contract that Texas owes to a hefty fellow in Prince Fielder. But hey, maybe they can just trade him in a year or two, if he hasn’t gone completely flat as a commodity before then. Big time contracts aren’t easy to shed but it still happens fairly frequently in modern baseball. The Tigers just did it, and there have been a few other very recent examples. Bad contract hot potato is becoming increasingly popular in Major League Baseball. 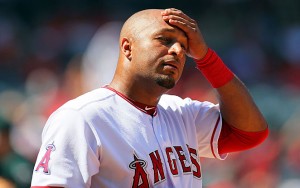 Los Angeles paid almost 42.2 million dollars for just 0.6 fWAR out of Wells in 208 games, and then they paid 28.1 million bucks to to the Yankees to make him go away. Tony Reagins resigned just one year after acquiring Wells, presumably to get as far away from Arte Moreno as possible (Moreno apparently said that he would fire Reagins before the 2011 season if he did not acquire Wells within 24 hours). 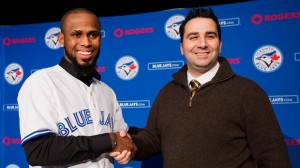 Toronto actually spent some serious prospect capital to bring in these two big free agent contracts. The financial commitment to Buehrle wasn’t gigantic on it’s own (3 years, $48M), but it was a lot to pay for a pitcher of his age and skill level, and when taken with Reyes’ big price tag (5 years, $96M) the total financial potato that Toronto was catching was pretty heavy. Buehrle was worth his salary and then some in 2013, while Reyes turned his ankle and the Blue Jays season into dust with one ill-fated, awkward slide. Neither of these players would likely project to be “worth” the remaining money on their contracts, but Buehrle gets brownie points for being probably the most dependable arm in baseball, and Reyes gets a gold star for being such a damn exciting player at a premium position. Toronto could probably still pass the potato if they wanted to, but for how much longer?

Result: Music is still playing, but the Dodgers aren’t even playing the same game. 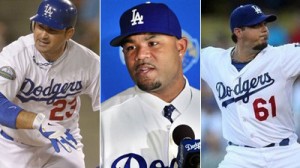 It was a stroke of genius by Boston to get rid of something like 253 million dollars in guaranteed payroll. They reinvested a bit of that money into some value free agents and ended up winning a World Series, while the Dodgers rode a ~220 million dollar team payroll to an NLCS appearance. The ROI for the Dodgers on these three players was not good in 2013 – they received just 5.6 fWAR for a little over 50 million dollars in 2013 payroll – but it’s not like they even care. They’ll just eat the potato and then roll around in their piles and piles of money.

Chime in below if you think I missed any recent hefty contract trades! 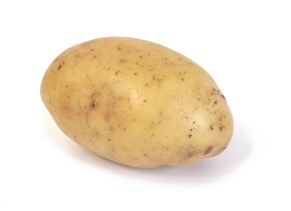