R.A. Dickey is on everyone’s minds right now thanks to our rising star Chris Carruthers’ excellent research into the The Dickey Effect, so I decided to update and re-post some knuckleball research that I did last offseason, after Toronto traded for Dickey.

R.A. Dickey had a rough first season in Toronto. His 4.21 ERA and 4.58 FIP were both much worse than his three year 2.95 ERA with the Mets. From 2010-2012, Dickey ranked 11th amongst all qualified starting pitchers in ERA and 19th in innings pitched. His total RA9-WAR of 13.9 in that span would describe him as the 7th most productive pitcher in baseball, if we were to slide his his RA9-WAR into an fWAR leaderboard. In 2013, he wasn’t anywhere close to that effective. His 2.4 RA9-WAR would have tied him with Julio Teheran as just the 52nd most productive starting pitcher in the game.

Dickey didn’t miss a start in 2013, but he pitched through some apparently debilitating back discomfort and notably diminished velocity. In 2012, Dickey’s knuckleball averaged about 77  mph in every start, holding the ability to touch 80 mph. In the early portion of 2013 as Dickey’s back was screaming, he could only average about 74 on the knuckler, and he lost the ability to consistently touch that 80 mph high velocity mark:

His velocity came back in the second half though, as you can see in the figure from Fangraphs, and so did his effectiveness. His 3.56 second half ERA was much better than his 4.69 first half mark. And if we just look at his last 11 starts, which the figure seems to indicate were made with his normal, 2012 knuckleball velocity, his ERA comes out as 3.35. That’s just 0.40 over his three year mark with the Mets, an increase that is very close to the generally accepted NL to AL conversion for pitchers moving leagues.

So there are some reasons to be optimistic about Dickey going forward, but it remains largely discouraging that the Blue Jays staff leader is a 39 year old with a history of back problems. If Dickey were a conventional pitcher, it would be justifiable to assume that a precipitous decline in performance at his age would be here to stay. Conventional pitchers peak at 27 years old, so R.A would be a dozen years past his physical prime at this point. Dickey obviously is not a conventional pitcher though. One thing I was curious about after Toronto traded for Dickey was how knuckleball pitchers age.

Wikipedia has a list of every primarily knuckleball pitcher who has thrown their wobbler in the big leagues. Add in Steven Wright, who threw 13.1 innings for Boston this year, and we have 27 knuckleballers in the history of the big league game, from Bearden to Zink:

These aren’t the only pitchers who have ever thrown the knuckleball. Eno Sarris compiled a list last year of all pitchers ever noted for throwing the weird one, and he gave us 68 names. We only care about the pitchers who relied heavily or solely on the pitch though, and since we don’t have historical pitch type data, that Wikipedia list seems to be our best source for names.

Here is the aging curve that I got from that chart while excluding Dickey. I’ve overlaid Dickey’s career to date so we can see how he lines up with the knuckleballer aging curve: 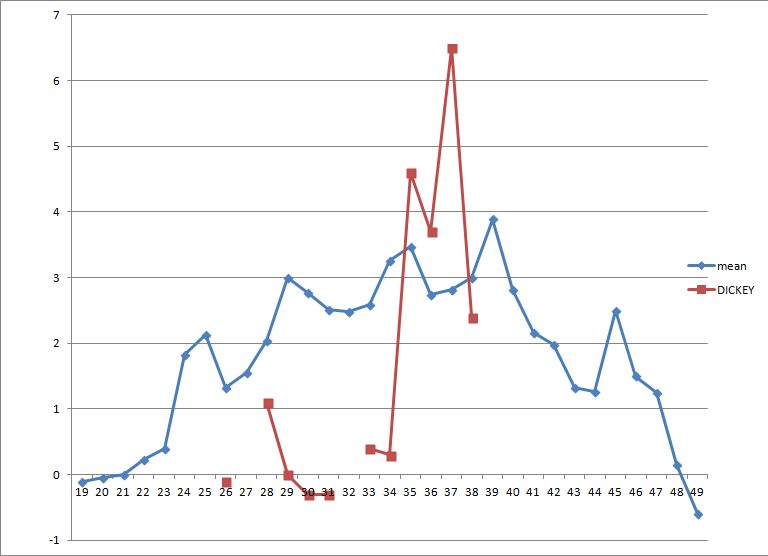 RA Dickey vs. other weirdos

It’s a pointy curve since we only have 26 careers in our sample size, but it still looks like an aging curve. It’s not practical to look for an actual peak age with this data, but it seems like knuckleballers are at their best when they are between perhaps 34 and 40 years old.

Now, this aging curve could have some issues. For one thing, there could be some selection bias inherent in Major League Baseball that makes our knuckler curve skew old. It’s possibly that teams are reluctant to give young knuckleballers a chance. This might have been the case with Hall of Famer Hoyt Wilhelm, for example, who didn’t debut in the majors until 29 years old (he fought in WWII, but still pitched 6 years in the minor leagues before making the bigs in ’52). The mean debut age in our sample is 25.52 years old, which I am guessing would be a bit older than the typical major league pitcher’s debut age. There are also guys like Dickey who flame out as traditional pitchers before adopting the knuckleball. Ex-Blue Jay great Tomo Ohka is currently attempting to do this at 37 years old. Boston’s Steven Wright converted to a knuckleballer a short while ago. So it is possible that the front end of the curve is sandbagged by circumstance, and if knuckleballers took up their craft early on and debuted at the same age as traditional pitchers, there’s a chance that the physical prime for a knuckleball pitcher might prove to be closer to that of straight throwers. Or, perhaps the productive prime would exhibit itself as a long plateau from an age in the late/mid 20’s to the late 30’s. After all, knuckleballers don’t tend to rely on velocity, the loss of which is the biggest factor of decline for regular pitchers.

The curve might also skew old because knuckleballers are given greater opportunities to pitch at advanced ages. It seems plausible that major league general managers might be more inclined to bank on production from old, proven knuckleballers than old, traditional arms. The logic here would be that the former skill-set has a higher perception of holding up at advanced ages. I do not know if this perception actually exists in the game, and I do not know if the trend of knuckleballers pitching at advanced age is influenced by more relative opportunity, or if it is all due to skill retention. We can maybe see some extremely loose evidence for this perception in Alex Anthopoulos’ decision to trade what he did for Dickey and then hand him an extension for his age 38-40 seasons.

This aging curve might also need to be regressed to an aging curve for traditional pitchers, since the sample size here is quite small. I am not sure if this is necessary but I imagine that in order to find out, the process would involve making an aging curve out of an increasing number of random pitchers from a large sample until your resulting polynomial fit the polynomial resulting from all pitchers in said sample to some degree of statistical pleasure. The sample size it took to do this would be your stabilization point for pitcher aging curves. If N from this process was much larger than 26, we would have to regress our aging curve polynomial towards the traditional pitcher curve by some degree. I am not as statistically precocious as @CCBreakingBlue, so I did not attempt to do this. I welcome any comments on this notion!

Getting back to Dickey, all of this makes it seem like there’s still a very real chance that he can regain his peak, 4-6 RA9-WAR form. His productive decline in 2013 should be about as alarming as the same amount of decline would be in maybe a 29 or 30 year old traditional pitcher….. well, actually, I guess that 29 or 30 year old wouldn’t be a 39 year old man with a history of back problems, so that’s probably saying too much.

* If you know of a primarily knuckleball pitcher that the Wikipedia list omitted, let me know and I’ll add them to the figure.

** If you’ve seen this before, I posted this curve last offseason on a couple of baseball forums under the username “froston”.
Offseason Power Rankings - Nov. 27
The Dickey Effect Part II - Wakefield