Entering the 2013 offseason there seemed to be something of a consensus among Jays fans regarding positions that would have to be addressed in order for the team to field a competitive roster in 2014. The team’s starting pitching ranked 26th in fWAR (6.9) and 29th in ERA (4.81) last year, while their catchers (-1.1) ranked 29th in fWAR and second basemen (-2.1) ranked dead last. These three areas thus represented an obvious starting point for a team looking to add wins to the roster for 2014.

Not surprisingly, general manager Alex Anthopoulos has been open about his plans to address the starting rotation, with the team linked to arms like Cubs starter Jeff Samardzija and free agent Ricky Nolasco, before he signed with the Twins yesterday. The team has also been linked to free agent catcher Jarrod Saltalamacchia. Looking at Steamer’s 2014 projections (which, as Chris Carruthers points out, have the Jays at about 87 wins next season), this seems like a reasonable offseason trajectory. Their projections, broken down by position, are as follows:

Based on these projections, Alex Anthopolous has correctly identified the starting rotation as a position of need. An 11.1 starters’ fWAR would rank in the bottom half of the league next year.  Adding an above-average starter could bump the team’s projected win total up close to 90 from 87. What about the catcher position? If you put much stock into Steamer’s projections, this is actually not an area where Alex Anthopoulos should be investing significant resources this offseason. The catchers remaining on the market – A.J. Pierzynski, Jarrod Saltalamacchia and Dioner Navarro being the best remaining targets – are not good bets to significantly exceed the projected production of in-house options J.P. Arencibia and Josh Thole. Where then should Alex Anthopoulos be looking to add wins once the rotation has been addressed? The answer is fairly obvious if you take a look at the Steamer projections; second base.

Maicer Izturis and Ryan Goins are expected to get the lion’s share of time at second, and neither is projected to do a very good job, projected to post a combined 0.4 fWAR. Acquiring just an average player at the position could mean a two-win improvement next year, and would have the added benefit of bumping Goins to AAA where his remaining option years make him a useful depth piece to be called up in case of injury – a particularly important role given that Jose Reyes and Brett Lawrie have had issues staying in the lineup. So who’s available to fill the Blue Jays‘ biggest position of need? There are a few options that I think could be acquired efficiently and improve the team in 2014.

There’s nothing exceptional about Omar Infante. Over his career he’s been a bit below-average offensively, a bit above-average defensively, and average on the bases. That said, Infante is coming off a 3.1 fWAR age-31 season with the Detroit Tigers, and has been at least an average player for four consecutive seasons. Steamer thinks more of the same is in store for Infante next year, projecting 2.2 fWAR over 118 games. This should suit Toronto just fine though. As we saw earlier, an average second baseman looks like a possible two-win improvement next year.

Fangraphs readers like him for a 3-year $27 million contract this offseason, which seems like a steal given that projections based on standard aging curves will  have Infante contributing 5-6 fWAR over the next three seasons. This translates to an investment of just $4.5-5.5 million per projected win, which would be a very shrewd addition in a market that seems to be paying in the vicinity of $7.5 million per win via free agency. Using this valuation, the Jays could go to 3 years and $40 million and be satisfied that they aren’t overpaying for the wins they’re purchasing.

Shortly after the world series ended, the Dodgers declined their $5.75 million team option on the veteran second baseman, opting instead to give him a $1 million buyout. Much like Infante, Mark Ellis contributes despite not being blessed with any exceptional tools. At this stage in his career he’ll provide a below-average bat and excellent defense while not doing much of anything on the bases. That package was worth 4.5 fWAR to the Dodgers over the last two years, and Steamer projects another 1.5 in 2014. Given his likely modest salary demands (Fangraphs crowdsourcing predicts a 2-year $11 million deal), he’d be a cheap stop-gap with a high probability of outproducing Goins and Izturis.

With Shin-Soo Choo possibly leaving via free agency this offseason, followed by Homer Bailey after 2014 and Mat Latos after 2015, the Reds are widely rumoured to be shopping the 4 years and $50 million remaining on Brandon Phillips’ contract. The 32-year old Phillips may no longer be a real threat for a 4-5 WAR season, but he’s still a productive player, putting up 2.6 fWAR last year for Cincinnati. The $50 million price tag is a bit hefty for a declining player hovering just a bit above league-average, but I don’t think it’s prohibitive. If you like Steamer’s 2.4 fWAR 2014 projection, 6-7 fWAR is a reasonable projection for Phillips over the next four seasons. At $50 million, Phillips represents an investment in the vicinity of $7-8 million per projected WAR, which is a reasonable investment under the assumption that a win currently costs $7.5 million on the free agent market. 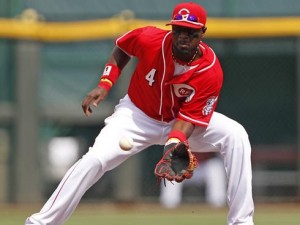 The obvious concern regarding Phillips is that we’ll see a repeat of last year’s Miami debacle in which the Jays were persuaded to give up valuable players while taking on expensive contracts that offered little potential for surplus value. Phillips’ contract is palatable for a team looking for help at second base, but there is no projected surplus value there. If the Reds are asking for real value in return for Phillips, the Blue Jays would be wise to look elsewhere for a second baseman.

Here’s an overview of the 2B options (you can scroll horizontally):

Each of the above players would add 1-2 wins to the team’s projected total for 2014, which represents a pretty significant addition given that the team’s true talent might already be in the middle-to-upper 80s. If the opportunity exists to acquire any of the three at fair market value, the team should make the addition. Earmarking resources for upgrades to the rotation or catcher position could cost the team an opportunity to efficiently add a win or two by upgrading second base. Remember Alex, a win is a win is a win.