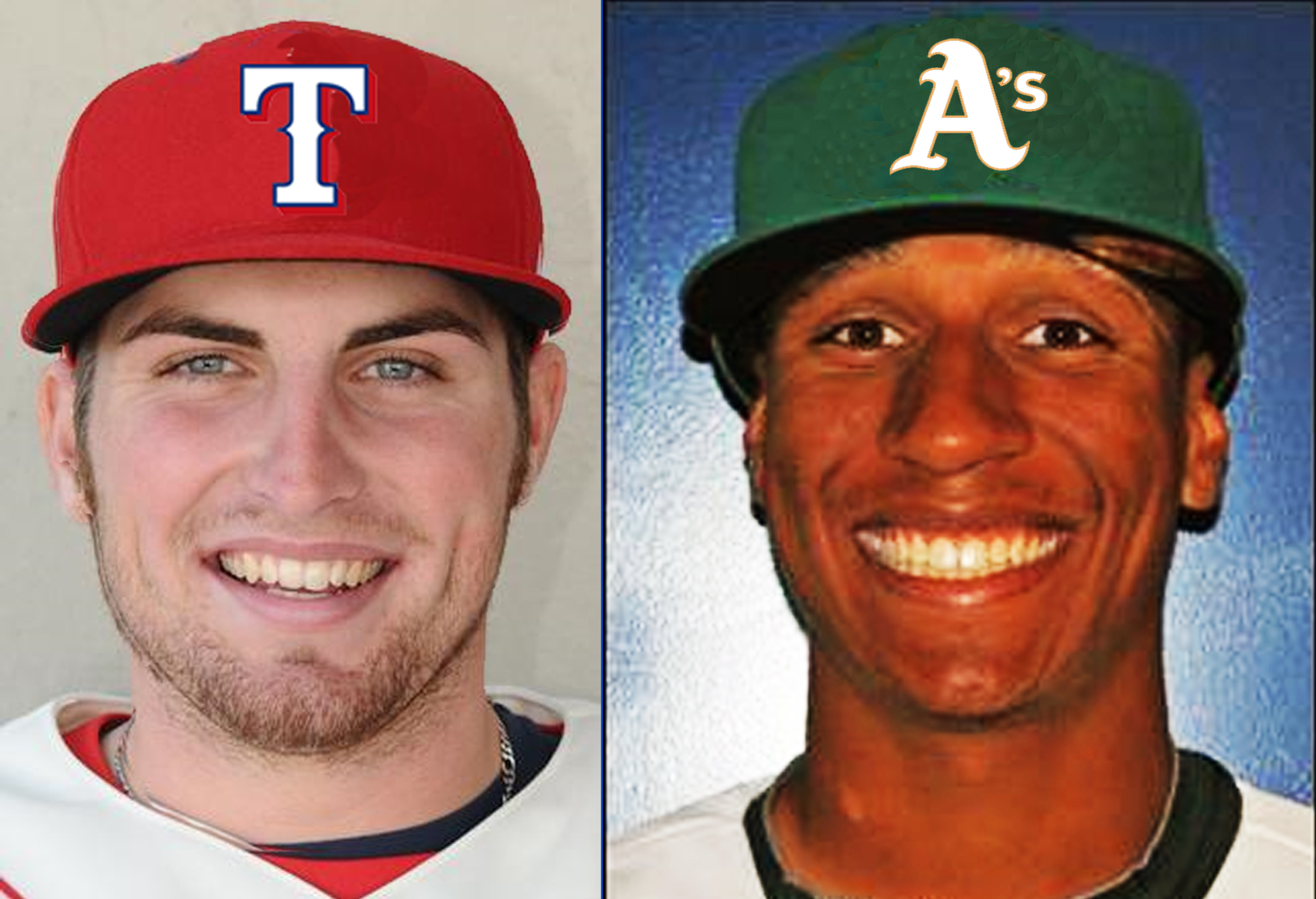 Alec Asher (left) of the Texas Rangers and Chris Bostick (right) of the Oakland Athletics, are two very good prospects who you’ve likely heard very little about at this point.

It’s Black Friday and shoppers won’t be the only ones looking for deals in the near offing. Restless baseball fans sitting through a slow start to the offseason will also be waiting for some trades to happen, hopefully in advance of next week’s winter meetings. If you’ll recall in Parts I and II of my feature I discussed prospects from the AL East and Central who could find themselves the subjects of such trades. Not as the centerpieces, but as throw-ins – the prospects you haven’t heard much about, the ones that you’ll end up logging online to read about when your team inevitably acquires them in a deal. In the third part of this feature I conclude my tour of the American League with the always tough West division.

Drafted out of high school in the 23rd round by San Francisco in 2010, Asher and the Giants had initially agreed to an $80,000 signing bonus, but the deal was voided when team doctors discovered bone chips in his right elbow. After surgery to clean up the issue, he would eventually go the junior college route to rebuild his value, pitching well and staying healthy enough that the always-savvy Rangers snapped him up in the fourth round two years later in the 2012 draft. I was pleasantly surprised to see Asher picked in the first few rounds, which some might have thought was a bit of a reach on the Rangers’ part. At the time I considered him one of the better arms in what admittedly was a weak class for college starters. Despite questions about his health history I liked Asher enough that year to put him 12th on my list of college right-handers, writing the following:

As a pro Asher’s best pitch has been his fastball, the pitch  he throws most often. His fastball has good life and he does a good job of maintaining his velocity deep into games. Always more of a flyball pitcher, Asher will give up his share of homeruns, but this shouldn’t prevent from succeeding as he moves through the minor leagues. His stuff allows him to work effectively up in the zone, generating enough movement to stay off the fat part of the bat more often than not. The majority of his strikeouts come via the high fastball up and out of the zone. His other primary pitch is a loopy curveball that he uses to keep hitters off balance or to get ahead in the count. His arsenal also includes a changeup and a slider, though he’s rarely had occasion to use them given how dominant his fastball has been at the lower levels.

Rangers fans I’ve spoken to at Lonestar Ball have compared him to Colby Lewis, which after looking back at Lewis late career stats and some video highlights I’ve decided to take as a complimentary assessment of Asher’s potential. At his best Asher is a power pitcher with three potential major league average pitches, easy mechanics, and a competitive demeanor on the mound. With his combination of size, stuff, and command, if he can stay healthy (something which he has done for two straight years now) he has the chance to be a number 3 starter at the peak of his ability.

Bostick was the definition of a “deep sleeper” pick back in 2011 when Oakland took him out of highschool in the 44th round of the amateur draft. Most players picked this late go unsigned, and they tend not to pan out even if they do turn pro. Bostick has defied both expectations. Not only did he forgo his commitment to St. John’s and sign with the Athletics at the deadline, but in his brief pro career he has shown signs of being more than a late-round afterthought.

A mature player with excellent work ethic, scouts are generally in agreement that Bostick’s best tool is his bat. He has quick hands and a short swing that allows him to barrel anything in or near the zone. Bostick is more of a line drive hitter at present, but he has enough bat speed to suggest that despite his size, he could hit for average power down the line. An aggressive hitter, there is some swing-and-miss to his game, but he’ll take enough walks and hit for enough extra bases to justify it I think.

An excellent athlete, Bostick played shortstop in high school but has made the transition to second base as a pro, albeit with mixed results. His defense at second has left something to be desired thus far as evidenced by his 22 errors in 2013. It’s a concerning number no doubt, but as a 20-year-old still learning the intricacies of a new position, he warrants a bit of patience – Derek Jeter once had seasons of 56 and 25 errors as a 19 and 20-year-old, and he would go on to win multiple gold glove awards. That’s not to project any similar expectations onto Bostick, but he definitely has the range and the arm strength to be a good second baseman once he becomes more comfortable at the position.

In Part II of the feature I discussed former Blue Jays prospect Travis D’Arnaud who was at one time considered the third piece acquired from Philadelphia in the Roy Halladay deal. I mention him now because I believe Marlette has similar potential to D’Arnaud who was likewise known to scouts for his combination of power and athleticism at the catching position.

Not your typical backstop, Marlette, a former high school third baseman, recorded an outstanding 60 yard dash time of 6.87 during his senior year. While there are some concerns about whether he can stick behind the plate long term, he has the raw physical tools to be a standout defensively. He’s quick and agile in blocking balls (only 3 errors and 10 passed balls in 2013) with above average arm strength (1.72 pop time in high school; 39 cs% in 126 minor league games). His receiving technique can still be rough at times, but at just 20-years-old, he has both the time, and the reputed work ethic to continue improving in that regard.

Aside from his defence the other question scouts have about Marlette is what kind of hitter he will ultimately become. While he shows tremendous raw power during batting practice, in game settings he turns into more of a linedrive gap-to-gap hitter. Of course this only really becomes a problem if he can’t stay at catcher, as it will affect the overall value of his bat. To his credit Marlette has done a good job becoming a better all-around hitter, nearly quadrupling his walk rate from the previous year from 2.8% to 8%, and cutting down his strikeouts from 21.5% to a very respectable 17.9% in a more pitcher friendly league. With Mike Zunino blocking Marlette’s immediate path to the big leagues however, Marlette’s name is certain to be near the top of many a GM’s holiday wish list when talking trade with the Mariners this offseason.

Picked in the 8th round of the 2012 draft by Houston, it’s safe to say that Heineman has exceeded expectations thus far as a pro. With UCLA Heineman had a reputation as a steady defensive player with good catch-and-throw skills but something of a light bat. While he has been just as advertised defensively for the Astros (throwing out 42% of would-be base stealers over his first two pro seasons while giving up only 11 passed balls in that same time frame), where Heineman has really impressed has been with his bat. Known in college as more of a pesky, on-base oriented hitter with a mature approach, Heineman has shown surprising pop with the Astros hitting for a robust (by his standards) .853 OPS over 661 plate appearances, while reaching a high-water mark for home runs in 2013 with 13. It is important to note however that the 13 home runs did come in the hitter-friendly Cal League, and that it was more home runs than he had hit previously in both college and the pros combined. The power spike also coincided with a notable increase in his strikeout rate (11% from 5.1% the previous year), and a decrease in his walk rate (11.2% to 7.5%).

The question going forward with Heineman will be which version is the statistical outlier? Right now he projects as a backup with above average defense at catcher, and the ability to get on base – a Ryan Hannigan type. But if the nascent power he showed in 2013 is for real, he could be something more, especially considering he’s a switch-hitter who hasn’t shown any significant platoon splits so far in his career.

It’s unfortunate for Heineman that the Astros system seems to be so deep in young backstops, to the extent that they’ve even had to risk sacrificing former Blue Jays farmhand Carlos Perez to the upcoming Rule Five draft. He’s currently blocked by Jason Castro, Carlos Corporan, Max Stassi, and Ben Heath, on the Astros depth chart, meaning his best shot at a future big league gig might be with another organization.

It’s tough to call a former fourth round pick, especially one ranked as high as 6th in his organization’s prospect list, a “sleeper” of any sort but given the dearth of prospects in the Anaheim organization, I’ve had to be a little more flexible than usual. This is not to disparage Yarbrough, who I consider to be a very solid player, but rather to explain why he’s on a list of under-the-radar players in the first place.

Yarbrough is an offensive-minded second baseman with solid enough secondary skills to be considered more than just an organizational guy (a euphemism for players without much of a major league future). Defensively he’s very steady at second base, with good instincts, quick hands, and a strong arm across the infield (measured at 84 mph in high school), though it is his bat that will ultimately determine his career prospects.

A smart hitter with an aggressive approach at the plate, Yarbrough has shown the ability to hit for average throughout his college and minor league careers; spraying the ball to all parts of the field; making consistent contact, and generally being difficult to strike out. He could stand to be more patient and improve his walk rates, which  tend to hover at around 3-4 %. This number of course was less concerning when paired with his equally minuscule strikeout rate of 8.4% in 2012, but more so when that strikeout rate rose to a less impressive 17.2% this past season. On the bright side, the rise in strikeouts did coincide with a slight increase in power, as Yarbrough hit 11 homeruns and added 32 doubles in 2013, however much of that could simply be attributed to the hitter-friendly environments in the Cal League.

Yarbrough is currently blocked at second base in the Anaheim system, first by Howie Kendrick at the Major League level, then in the minors by the talented youngster Taylor Lindsay. A team in need of good young options in the middle infield (*cough* Blue Jays), might do well to contact the Angels to benefit from of theirs. It may be the one position at which they’re pretty solid organizationally and one which they are likely to use to improve their big-league roster.

Phil Hughes Signs With the Twins
Who's On Second?