Home » Analysis » Toronto Gets a Catcher

Toronto Gets a Catcher

Step out of the spotlight Dan Johnson, you’re no longer the biggest news of the Blue Jays’ offseason. With last night’s 11:59 PM non-tender deadline looming, Toronto signed catcher Dioner Navarro to a two-year $8 million contract and opted not to tender a contract to J.P. Arencibia, effectively ending his time as a Blue Jay. Arencibia was projected by MLBTR’s Matt Swartz to earn $2.8 million in his first arbitration season.

Navarro,  30 in February, will earn $3 million in 2014 and $5 million in 2015. After a breakout 2008 season in which he put up 2.2 fWAR with the Tampa Bay Rays, Navarro fell off the map a bit, playing in just 227 games over the following three seasons and contributing -1.2 fWAR over that time for Tampa Bay and the L.A. Dodgers. He signed a minor-league deal with Cincinnati prior to the 2012 season, and played well enough in his 24 games of major league action to earn a guaranteed $1.75 million contract from the Cubs for 2013, which would be his most successful campaign since 2008. Navarro contributed 1.6 fWAR for the Cubs on the strength of a 136 wRC+, easily the best offensive performance of his career.

What can Toronto fans expect from Navarro going forward? Frankly, I have no idea. Navarro is 715 games and 2505 plate appearances into a career that has seen him contribute a decidedly below-average 0.9 fWAR/150 games. His career 83 wRC+ is below-average even for catchers, his defense routinely rates as slightly below-average, and his framing is also sub-par according to Matthew Carruth’s work. So what does Dioner Navarro offer? The potential for an upgrade on J.P. Arencibia if he brings his bat with him to Toronto. Nobody should be expecting a repeat of his 136 wRC+ 2013 season, but that doesn’t  necessarily mean we should expect a regression to the career 76 wRC+ guy he was prior to his big year. There were some obviously unsustainable aspects to Navarro’s performance last year – mainly a 0.307 BABIP and 18.8% HR/FB, both well above his career means. Steamer unsurprisingly projects a regression in both cases, but still has Navarro at a 96 wRC+ next year, projecting an fWAR of 1.7 over 367 plate appearances. 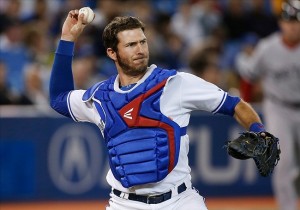 This is a likely upgrade on Arencibia, but I’m not convinced that it’s all that significant of one. Before comparing the two players, let’s first call a spade a spade: J.P. Arencibia’s 2013 seasons was one of the worst individual seasons in franchise history. The man did it all; he led all catchers in passed balls, he had the 4th-worst OBP and 12th-worst K/BB in history among players with at least 400 plate appearances, he publicly called out media members who criticized him. Overall, he was a disaster on the field to the tune of -0.6 fWAR and an unquantifiable disaster off the field. A lot of fans, myself among them, are happy to see the end of the J.P. Arencibia era in Toronto, but how much did the team’s on-field win projection change yesterday? Arencibia has been worth 0.4 fWAR/150 games in his career, but Steamer has him rebounding a bit after his dreadful 2013, projecting 0.8 fWAR over 262 plate appearances. This translates to about 1.1 fWAR over the 367 plate appearances projected for Navarro.

Dioner Navarro was the far better player in 2013. There is no debating that. The difference between the two isn’t likely to be that far apart going forward though. Over their careers Navarro has been worth about 0.5 fWAR more than Arencibia per 150 games, and Steamer expects that separation to be about the same in 2014, though projections for both players seem to be on the optimistic side. Consider further that Matthew Carruth had Arencibia as one of the best pitch framers in baseball in 2013 (albeit after years rating as well below-average) and it’s difficult to argue that the team improved by more than half a win in 2014 with yesterday’s moves. That isn’t to say that they made a poor decision – a projected 0.5 win upgrade is well worth the $0.2 million increase in salary for 2013. Given the uncertainty surrounding Navarro, it’s just difficult to get excited about the idea of him as the team’s starting catcher, especially with Josh Thole as his likely partner.

What makes this so hard for me to swallow is the fact that the market has not been lacking in quality catching help over the last two offseasons. Russell Martin and David Ross signed team-friendly deals last offseason while Alex Anthopoulos was apparently content with Arencibia as his catcher. Carlos Ruiz and Brian McCann were out there this year. Ryan Hanigan was available via trade, though the Rays have apparently snatched him up. I know it’s hard to criticize a team for moves not made, but given the quality of some of the catchers that have recently changed teams, Navarro feels a lot like a consolation prize. He figures to be an upgrade on Arencibia, and should earn the money he’ll be paid, but I don’t think anyone can say with confidence that he’ll be a league-average catcher going forward – his track record is just too inconsistent to warrant high confidence in his projection.  Big “meh” from me here if he’s being relied on to start the majority of the team’s games in 2014.