Jonah Keri is one of the most reputable baseball reporter/writer guys in the reporting/writing game. He’s not the type to run with a flimsy rumour, or to hang his hat on breaking news first on Twitter in order to get curious click-throughs on some 200 word “article”. Keri is a thoughtful writer – heck, he writes for Grantland and his average piece there is probably 3000 some odd words. So when Keri published his Winter Meetings Primer on Grantland today, this chunk of it caused quite a stir:

One rumor making the rounds has the Jays mulling a blockbuster deal featuring Toronto slugger Edwin Encarnacion and Rays ace David Price. Realistically, though, Toronto has gone too far down the road of adding veterans and trying to win now to justify trading one of the best power hitters in the game, even though starting pitching needs to be the team’s top priority.

Edwin for Price would be massive, and Anthopoulos isn’t afraid of making big splashes. When Keri says that this rumour is making the rounds, I believe him fully. This rumoured rumour should probably carry a lot (or a bit) more weight than something like, oh, I dunno, that Jose for Dom Brown+ one started in November by that Philadelphia radio guy who didn’t even know how to spell Bautista.

It’s also a pretty fun swap to think about. David Price is a guy whose reputation might transcend his abilities. His Cy Young award, Cy Young runner up, 3.19 career ERA in the AL East, age, and general perception as an Ace of Aces seem to overshadow the fact that he’s never been a five win pitcher and, more importantly, that his velocity dropped two whole ticks last season. Edwin is a really interesting player. A late blooming thumper of epic proportions a la his teammate Jose Bautista and divisional counterpart Crush Davis, Encarnacion is a statistical oddity that can destroy baseballs while walking more than he whiffs and, more importantly, his home run trot involves a mimed shoulder parrot routine.

Asset wise, these two players present a wonderful opportunity for a comparison because they are under control for similar, relatively short amounts of time. This means that when we extend our WAR projections along an aging curve for both of these fellows, we’re probably not spinning too far away from planet reasonable.

The Narrative: Late blooming power hitters are seemingly a yearly occurrence in baseball, and Edwin was the 2012 model. The Blue Jays finally told him to give up on third base, and when he could focus on his hitting full time he turned into a behemoth (because that always works). He’s been absolutely locked in at the plate for two straight seasons, walking (13.1 BB%) more than he’s struck out (12.3 K%) since 2012 began. In that span, his 78 dingers are third in the game behind Cabrera and Davis, his Isolated Power (.270) is fourth behind those two and Giancarlo, and his wOBA is fifth behind Cabrera, Votto, Trout, and Cutch. Ed was worth exactly 4.1 fWAR in both 2012 and 2013. His HR trot indicates that he might be part T-Rex or Pirate. The former DFA case forms an aesthetically pleasing offensive tandem with fellow Dominican and late-blooming cast off Jose Bautista. 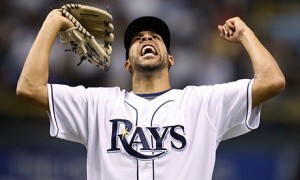 The Narrative: Drafted 1:1 in 2007, Price has been the Rays’ Ace for four seasons. He was an All Star for three of those campaigns, a Cy Young runner up once, and a Cy Young winner once. His 17.4 fWAR since 2010 ranks eighth in the game, functionally tied with CC, Anibal Sanchez, and Scherzer, but a fair distance behind Felix, Lee, Kershaw, and Verlander. This binning would describe him as a second tier Ace, if you like to debate the merits and meanings of things like Acedom. Price is getting expensive, which is definitely why the poor Rays want to deal such a productive player. He’s also getting worse, even if you haven’t noticed.

Price’s average two seamer and four seamer were both about 95.5 mph in 2012, with his peak velocities at 98.3 and 99.6. Last year his fastballs averaged just 93.5, and they peaked at under 97 mph. That’s about two ticks off the fastball in one offseason. Fastball velocity is a huge factor in pitcher effectiveness, and the loss of it is probably the chief factor in pitcher decline. While it seems like Price performed just fine in 2013 without as much zip on his heater, counteracting a drop in K% (20.4% vs. 22.1% career) by slicing his BB% in half (3.7% vs. 7.2% career) in order to maintain his low 3’s FIP and xFIP figures, these numbers might not tell the whole story. FIP and xFIP aren’t truly fielding independent, they are heavily affected by catcher pitch framing, and the Rays have been employing the best pitch framer in the business. Luckily, Chris just made a new ERA predictor/estimator gizmo that nukes pitch framing, and he shared Price’s four year figures with me. Let’s shed some light on Price’s true pitching skill with xxFIP:

It looks like Molina’s framing may have been increasing Price’s apparent run prevention skills by somewhere between 2/5 and 4/5 of a run per 9 innings. And, it looks like Price actually may have declined in 2013, it was just hard to see. Did xxFIP catch some skill decline that xFIP missed out on due to framing noise? Maybe. If you want to read more about xxFIP and what it is built on, check out Chris’s stuff.

The Numbers: Price will be 28 years old for 2014. As a super two player, he’s arbitration eligible for 2014 and 2015. Price made over $10M in 2012 though, so these won’t really be “cost controlled” years, at least not by a large amount. The MLBTR / Matt Swartz arbitration award model projects that he’ll be awarded $13.1M in 2014. Let’s add the same increase in 2015 and say that he’ll make $29.3M in the next two seasons. Steamer thinks Price will pitch 192 innings at a 3.27 FIP in 2014, good for 3.8 WAR. I think it’s ludicrous to predict any pitcher for that many innings, and I also think that his true talent run prevention skills are a bit worse than that with his current velocity. It is not exactly clear if pitchers really decline from 27 to 29, so we won’t knock Price down for getting old. Let’s pencil him in for 3.5 wins in each of the next two seasons, even though I think that’s a bit high.

Edwin should be worth more than twice as much as Price. The talent is very similar, and at only 31 months older than Price, the age gap probably isn’t enough to surpass the security gap that Encarnacion brings to the table as a position player. Arms are flimsy. Ed’s contract is also a lot better, with him making basically the same amount in three years as Price will make in two. But the industry consensus is probably that the younger, highly decorated Ace is a more valuable commodity. Look at these tweets from Mike Wilner:

Actually Mike, they probably would.

And it’s not like Anthopoulos doesn’t have a track record of locking up above average position players on sub-market deals without really realizing it before punting away most of their value in trade.

A fair trade would involve the Blue Jays getting Price and then some for Encarnacion. If the Blue Jays overbinge in response to their starting pitching craving and actually flip Edwin or, baseball gods forbid, Edwin+ for David Price, it would be a significant loss of hypothetical present context value.

It’s just a rumour though.

Breaking Blue: Looking For Writers
One Estimator to Rule Them All: xxFIP – Part 2: xBB%