One of the most dominant players of this generation walked away from the game yesterday, as Roy Halladay announced his retirement from baseball after a 16-year major-league career. As a Jays fan who discovered baseball in the late 90s, I was lucky enough to follow Halladay’s career from start to finish. For almost a decade he was the bright spot on team without much else to be excited about. No matter how bad things were with the team, you knew they had a great chance to win every fifth day when Doc took the ball. 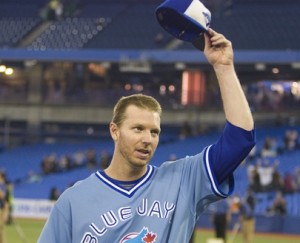 His story is a familiar one to baseball fans in Canada. Picked 17th overall by the Jays in 1995, Halladay moved quickly through the system, establishing himself as a top prospect and bursting onto the major league scene with a near no-hitter in his 2nd major league start in the final game of the 1998 season. It would not be smooth sailing from there. After a moderately successful rookie season, Halladay’s ERA climbed to 10.64 in 2000, and he spent significant time in AAA Syracuse. His low point would come in 2001 when he was demoted to high-A Dunedin to revamp his delivery and approach under Mel Queen, who the Blue Jays convinced to come out of retirement to help their struggling young arm.

“There’s no one I made that drastic a change to and verbally abused the way I did Doc. There aren’t many people that would have gone through what I put him through. I had to make him understand that he was very unintelligent about baseball. He had no idea about the game.” – Mel Queen

Under Queen’s tutelage, Halladay would make short stops in AA Tennessee and AAA Syracuse before earning his way back to the major leagues for good in July of 2001. The Halladay that returned was a different beast entirely from the one that left. 4.1 fWAR in just 105.1 innings to close out the 2001 season. 7.3 fWAR in 2002. 7.4fWAR and a Cy Young award in 2003. Halladay would remain dominant for more than a decade after his return, collecting a second Cy Young after an 8.1 fWAR season for the Phillies in 2011. Overall he hangs up the cleats with a 202-105 record, a 3.38 ERA, 67 complete games, two Cy Young awards, eight all-star selections, and 67.6 fWAR. He also threw a no-hitter in his first ever postseason game, becoming just the second player in major league history to throw a no-hitter in the playoffs. If the Hall of Fame voters get it right, an induction to Cooperstown will be the final feather in Doc’s cap five years from now. The most compelling evidence for Halladay as a HOF-caliber pitcher is this table:

These are the fWAR leaders in the 12-year stretch from 2001-2012, eliminating everything Doc did before reinventing himself with Mel Queen. As you can see, he contributed more wins than any other pitcher in baseball over this stretch, and nobody else was particularly close. Included in this is a remarkable 64 complete games. No other pitcher had more than 35 over that same period.

For the annoying bunch among you who are about to accuse me of cherry-picking his best years, here:

This isn’t a cherry-picked list of Halladay’s best seasons. It encompasses his entire career. In the 16-year period between his debut and his retirement, the only pitcher to accrue more fWAR was The Big Unit (who will without question be a first-ballot inductee). This should really drive home the point that Halladay wasn’t merely good, he was a premier talent of his generation.

Halladay may not have the gaudy counting stats that the voters seem to like, as his 203 career victories and 2117 strikeouts are fairly pedestrian as far as HOF inductees go. He also doesn’t have a World Series ring – the price to be paid for giving his best years to an organization that couldn’t surround him with enough talent to get him into a single playoff game. What he does have is a sustained stretch as the best pitcher in the game. This may seem hyperbolic, but it isn’t. To get a feel for how Halladay stacks up against the all-time greats, I looked at all pitchers with at least 2000 career IP, and then sorted them by career fWAR/2000 innings pitched. What I got was this:

Now don’t get me wrong, I’m not arguing that longevity isn’t important. It is. But it’s also important that people realize just how dominant Halladay was in the innings he did pitch (and 2700+ is nothing to sneeze at). Halladay compares favourably to the very best pitchers to ever play the game. His closest comparison in the above table is Sandy Koufax, who like Halladay was forced by injury to retire before seeing an erosion of skill. Koufax was inducted into Cooperstown in 1972, six years after his retirement. The voters were able to look past longevity and elect one of the most dominant pitchers the game has ever seen. Hopefully Halladay is afforded that same courtesy.

Trade 'em All, Al
Trade Value of Hamels and Lee