Trade Value of Hamels and Lee

As reported this morning by Buster Olney, the Phillies are supposedly shopping Cliff Lee and Cole Hamels. It’s a good idea to know how much each of them is actually worth with their large contracts taken into account. If the Blue Jays wanted to trade for them, what kind of surplus are they looking at getting back? 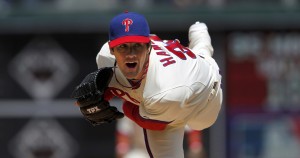 I will use our model of $7.5M/WAR this year, compounded 9% annually. Hamels is under contract through 2018 at $22.5M per year. He also has a vesting option of $24M for 2019 if he reaches 200 IP in 2018 and 400IP in 2017 and 2018 total, the vesting option is also null if he is on the DL with an arm injury at the end of 2018. If this option does not vest, the Phillies (or current team) have a $20M team option. Since Hamels projects to be still a marginal asset at this price, we will assume the Phillies (or current team) will exercise this option. Steamer currently projects 3.3 WAR for Hamels in 2014 and I will use Oliver’s 5 year projection age decline as a guideline for Hamels decline. Here are the numbers for Hamels:

Hamels looks to be worth around $15-$20M in surplus over the remaining life of his contract. In comparison, Nik recently showed us that David Price has a surplus of about $25M, and Edwin Encarnacion has a surplus of around $56M. Hamels is not near the asset that these two are. From Pirates Prospects, pitchers in the top 26-50 prospect rank range average a surplus of $14.7M. According to many prospect ranking lists, both Aaron Sanchez and Marcus Stroman may fall into this range, but they could also be in the lower 51-75 range with a surplus of $7.50M. Let’s give them an arbitrary $12M, but with $/WAR moving to $7.5 this year instead of $5 in the study, this should be around $18M. According to this, either Stroman or Sanchez would be a fair trade for Hamels. However, Sanchez and Stroman have the potential to be worth much more, but there is the risk that they could be worth much less. You can decide if you think Hamels is worth one of these two. 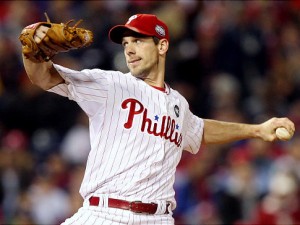 It’s a little bit less clear how we should treat the final year of Lee’s contract, but we can try and decipher the scenarios. It states that the $27.5 option vests if  Lee reaches 200 IP in 2015 or 400 IP over 2014 and 2015. There is a $12.5M buyout on the option. It is unclear what happens if the option does not vest, so I will assume he will be a free agent if he does not reach those totals. Lee is owed $25M in the next two seasons, and since the buyout would be a loss of around $12M for the team, we will assume this does not happen. Similar to Hamels, we will use Steamer’s 3.8 WAR projection and Oliver’s 5 year projections as a guideline of decline. Here is a surplus breakdown of Lee:

So Lee is worth around $6M in surplus. Lee making or not making his vesting option does not make that much of a difference in his value. This is definitely not worth one of Sanchez or Stroman. We’d have to step out of the top 100 prospect range to get value for Lee. Colby Rasmus is projected to be worth double Lee just this year, assuming the projected $6.5M arbitration figure and Steamers’ 3.3 WAR. Rasmus is projected to be worth $18.3M, around the same as Cole Hamels. In general, the asking price for Lee may be too high, but we have no idea what Rueben Amaro Jr. is looking for. Someone like Sean Nolin or Drew Hutchison might provide fair trade value, but like Sanchez and Stroman, ceilings are higher and floors are lower. Again, you can decide for yourself if you think one of these guys is worth Lee, but Sanchez and Stroman are definitely not.

Yes, baseball is definitely a chess game. At least we know Hamels and Lee know how to play! 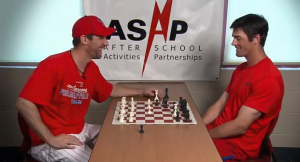