Home » Analysis » One Estimator to Rule Them All: xxFIP – Part 3

One Estimator to Rule Them All: xxFIP – Part 3

If you missed part 1 (xK%) and part 2 (xBB%) they can be found here and here. I highly recommend reading them first.

Today will be the final instalment of my 3 week look at xxFIP. I’ll talk a little about xHR/FB, and then get into some predictability results of xxFIP.

Coming up with a formula for xHR/FB was very tricky. We know HR/FB has little to no correlation year to year. It had an R^2 below 0.001 for 2012-2013. Because of this unpredictability, I needed very large sample sizes to evaluate. I took all pitchers from 2008-2012 with at least 400 IP. Every pitcher controlled rate was compared to HR/FB. The winner was Z-Contact% (0.13 R^2). This may look small, but consider how volatile HR/FB is. We know fastball velocity has a lot to do with K%, and it’s correlation is only around .20. So 0.125 for Z-Contact% was actually very unexpected and quite high.

There were no other close rate stats, and I wanted to keep xHR/FB very simple for ease. The xHR/FB formula is:

This xHR/FB formula regresses a lot towards the mean and is quite close to using league HR/FB. For example the leader in xHR/FB in 2013 was Max Scherzer at 9.4% (league average was 10.5%) and the next closest was Matt Harvey at 9.8%. In actual results, starters can see as low as 4.5% in a season.

I ran the predictability tests on the out of sample 2013 and the in sample 2008-2012 years. xHR/FB consistently had a lower RMSE than league average HR/FB but the difference was very small (as in .0005 small). Nevertheless, it was consistent in outperforming league HR/FB, even if only be a little. The good thing about xHR/FB is that it increases standard deviation while not losing predictability. This increase in standard deviation makes up for some of the regressing in xK% and xBB%, and brings xxFIP closer to xFIP in terms of standard deviation.

A little lengthy I know, but it’s worth it!

As Tom Tango pointed out with TIPS, testing should really be done on pitchers that change teams in order to, theoretically, take defense and framing out of the equation when testing. I will reveal the results of the out of sample (2012-2013) test with only the team changers, and then with everyone. As can be expected, the results were a little better with the team changers, since framing was mostly eliminated.

Here, it is important to note that there were only 14 pitchers in the 200 IP bin, which is not a very large sample size. You shouldn’t draw a conclusion that ERA suddenly becomes awesome, because we know it doesn’t. xxFIP blows everyone out of the water at any IP! Sorry TIPS, it’s not much of a contest.

The previous table is the real sample of interest, but I will include everyone to confirm predicability with a larger sample size:

Now here we see SIERA taking back over when we approach 200 IP. There are some sample size concerns at the higher IP (as evidenced by RMSE increasing from 188-198) so take it with a grain of salt. Another reason as to why SIERA takes over could be due to a starting pitcher remaining with the same catcher the next year, and having the same framing affect his K and BB rates. When we only looked at team changers, xxFIP was better at the same 188 IP interval. It appears that xxFIP is likely the best estimator to use for any in-season sample. It’s the most predictive AND eliminates catcher framing and umpire bias.

As noted before however, there may be some pitchers that consistently get more strikes added than others. This is because they tend to throw just out of the zone trying to get calls, and it works for them. Some of these guys might be better to use xFIP with. Mark Buehrle is Exhibit A in this case. Casey Janssen is another example.

With my xK% and xBB%, you could also sub these into SIERA, and you would likely have an estimator on par with xxFIP. The reason that I did not do this however, is  because of the complication of SIERA, and some of the inputs not being intuitive. xFIP is generally preferred over SIERA due to simplicity.

Without further adieu here are the 2013 leaders in xxFIP!

And here is everyone! You can search for any pitcher you want!

Maybe the Blue Jays should acquire John McDonald to be our ace! ⅓ IP is a good sample size right? 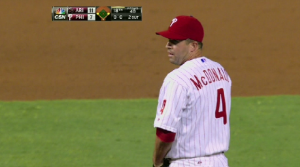 Rangers Board The Choo Choo Train
Bird Seed: Infante, Trumbo, Others on the Move