Casey Janssen has been the Jays’ closer for two years now and he’s done a hell of a job. His highest ERA in the past 3 seasons was 2.56. Janssen loves to pick the corners and try to get favourable calls at the knees from umpires. A pitch from him is rarely up in the zone. Casey has been one of the few bright spots over the past three rather bleak years for the Jays. I know it sounds ludicrous, but could Casey Janssen receive and turn down a qualifying offer after this season? This year’s qualifying offer figure was approximately $14M.

Yes, his agent is not Scott Boras, so this is unlikely to happen, but it is interesting to compare Janssen to some of the other free agent signings recently. Janssen has posted a 2.45 ERA over the past three seasons along with a 2.76 FIP and 3.03 xFIP. He has also had 58 saves. For the sake of argument, let’s say Janssen posts the same numbers in 2014 with 30 saves. His resume leading into free agency would be 4 years averaging 2.45/2.76/3.03 with 86 saves over the past 3. In terms of WAR Janssen would be averaging 1.2 WAR/season for a total of 4.8 over 4 years and be entering his age 33 season.

The first and most obvious case study would be Rafael Soriano. Soriano was the first reliever to ever receive (and turn down) a qualifying offer. Over the 4 years leading up to his free agency, Soriano averaged a 2.64/3.05/3.53 line. Janssen’s line is obviously superior. Soriano had 116 saves however, 28 more than Janssen. Soriano also posted a 5.1 WAR in the 4 years, mainly due to pitching 245 innings compared to Janssen’s (approximate) 229. Soriano was also entering his age 33 season, just like Janssen. The difference in ERA/FIP/xFIP clearly makes Janssen a superior pitcher at the time of free agency, and Soriano managed to get a qualifying offer and then sign a $28M contract over two years. Based on this alone it would appear Janssen could do the same. 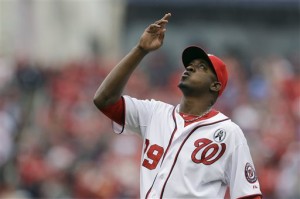 Jonathon Papelbon signed his FA contract in the year prior to Soriano, and would have likely been extended a qualifying offer if they had existed. He was a Type A free agent, and did net the Red Sox a compensation pick. Papelbon signed a 4-year deal worth $50M with the Phillies, so based on that lofty market value it seems fairly reasonable to assume that Boston would have offered him a QO and Philadelphia would have been fine with stomaching the forfeited pick. In his 4 years leading up to his free agency, Papelbon posted a 2.75/2.53/3.00 line. Casey Janssen has a significant edge in ERA (arguably most important for contracts), while Papelbon has the edge in FIP. Papelbon did have 147 saves however, the longer track record, and 2 years in youth. Overall, Papelbon would have been the superior asset, but Janssen wouldn’t be too far behind. Papelbon’s contract could also be considered much greater than Soriano’s contract due to the length, meaning Janssen doesn’t have to be at Papelbon’s level to still earn a qualifying offer.

Now let’s look at some of the reliever craziness happening this year. There is lots of competition, but free agents (some not even closers) are pulling in all kinds of money. Brian Wilson received a guaranteed $19M over 2 years with the Dodgers. Wilson has only pitched 15.2 innings over the past two years and posted a 3.00/2.92/3.33 line in the 4 years prior. Janssen’s resume is clearly superior and yet Wilson still got $10M this year and a player option at $9M for 2015. 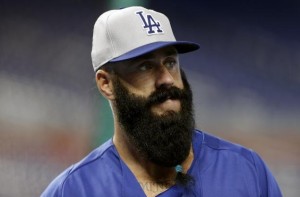 Maybe the beard is worth $10M

Joe Nathan signed for two years at $10M each with the Tigers. He didn’t receive a qualifying offer, but it was considered. His age (39) makes him a little bit of a different case. Still, Nathan posted a 2.80/2.97/3.20 over the past three seasons while missing 2010. Nathan had 94 saves in that span. Based on ERA/FIP/xFIP and age, Janssen is a superior asset to Nathan and might extrapolate to a qualifying offer.

Joaquin Benoit earned a $15.5M deal over two years with the Padres. This isn’t qualifying offer value, but it isn’t too far away considering Benoit’s age and lack of saves. Benoit has posted a 2.53/3.17/3.06 line over the past 4 years. This is actually not too far off of Janssen’s numbers, but Benoit only had 29 saves, compared to our 88 save number for Janssen. Benoit will also be three years older than Janssen at their respective free agency periods. It can also be noted that Benoit was not even signed into a closer’s role in San Diego, with Huston Street holding that role down. More evidence here that Janssen might have a market value near qualifying offer territory.

Grant Balfour was in an almost identical contract situation to Benoit before the Orioles pulled out of the agreement. 2 years and $15M were agreed upon for the 36 year old closer. Balfour had a 2.47/3.25/3.61 line in his past 4 years with 64 saves. ERA is close, but Janssen’s FIP/xFIP, WAR, age, and saves are all better. This further supports the probability of Janssen’s market value being at the right level.

Fernando Rodney has still yet to sign, and it will be very telling to see what he earns. Rodney had a 2.91/3.21/3.60 line over the past 4 years, which is around 0.50 runs per nine behind Janssen’s numbers. Rodney only has 108 saves in that period as well. 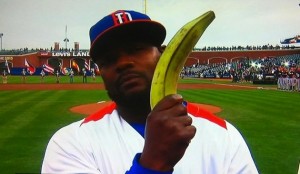 The plantain has to be worth at least $1M right?

Jim Johnson is not a free agent, but it appears his market value would be worth a qualifying offer after this year. Johnson is projected to earn $10.8M in arbitration this year, not far off a qualifying offer. He also reportedly asked the Orioles for a Papelbon type contract (4 years $50M). What numbers does he have to back up these demands? He has a 2.77/3.28/3.60 line over the past 4 years with 111 saves.  Janssen is definitely more valuable than this, even with the 2 year age difference. More evidence that Janssen might be QO worthy.

It’s also not just closers who are earning some cash. Joe Smith, J.P. Howell, Boone Logan, and Javier Lopez have also pulled in some dough. Here are their numbers:

Lopez, Logan, and Howell are all lefty-specialists, a fair cut below a closer, and are still pulling in significant cash. Logan is getting paid more per inning pitched than Cliff Lee. None of these guys have near the value Janssen has in any category, and yet they are still getting $5M+ AAV on multi-year deals.

The market for closers this year was also very saturated, which would theoretically drive prices down. Even with the saturation, relievers were still getting rather inane amounts of money compared to their real value.

The 2015 free agent class has Johnson, Romo, and Janssen, as well as 38 year olds Grilli and Putz. 40 year old Koji Uehara will also be a free agent. How does Janssen compare to the rest of the class?

He doesn’t really look out of place based on age and performance. Romo is the obvious outlier, and with another stellar year, I’m sure he’ll have an extension and/or qualifying offer. Based on age alone, it would be hard to see Grilli, Uehara, or Putz being given a QO. It is possible, especially if Uehara repeats, but age makes it difficult (see Joe Nathan). 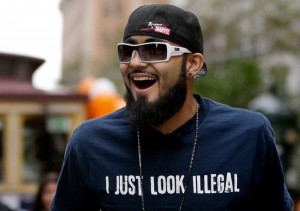 Overall, I think it is very possible that Janssen could net the Blue Jays a compensation pick based on his market value. However, there is the risk associated with him accepting the offer. Approximately $15M for a reliever is bad news, and I believe you should never have a pitcher past arbitration in your bullpen. It probably makes the most sense to trade Janssen right now due to more value this year, and a chance at the comp pick the following year if he excels (for the other team). The Jays have a plethora of arms that could step in and fill his spot with little to no noticeable difference. If the Jays prefer to keep him and just let him walk, then they will have lost out on some real value, unless he helps the team to the postseason. If they plan to extend a qualifying offer, they will be taking the risk that he does not perform in 2014 and/or that he will accept the offer. Right about now I would be wishing Scott Boras was Janssen’s agent if I were the Blue Jays. A comp pick would be all but guaranteed in that case.