One of the most common sabermetric faux pas is the misinterpretation of a player’s platoon splits. It is very common for fans to simply look at a player’s splits from last season, or the last couple of seasons, and form an opinion on that player’s platoon skills based on that information.

Even the statistically baptized can sometimes be found committing this sin. Someone who has read Moneyball and The Extra 2% might go looking for advantageous platoons on their favourite team’s depth chart which would give their squad a slight edge if implemented on the field. Here’s are a couple of illustrative Blue Jays examples.

The switch hitting Dioner Navarro has pretty big wOBA split in his career – .339 vs. LHP and just .288 vs. RHP. Josh Thole, a left handed hitter, has hit right handed pitching a bit better than Navarro, holding a career wOBA of .298 against pitching from that side. And despite being a right handed hitter, Eric Kratz has a pretty big negative career batting split, having hit righties to the tune of a .307 wOBA in his career (vs. just .254 against LHP). Should it be an obvious decision to platoon Navarro with Kratz or Thole? In order to answer that, we need to properly regress these platoon splits! 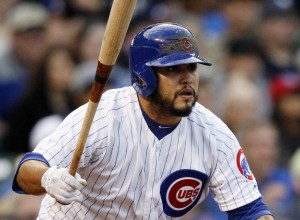 To platoon, or not to platoon?

The Blue Jays just added a small amount of depth underneath their blackhole at 2B by signing Chris Getz to a minor league deal. One of the first things a numerically inclined Blue Jays fan might do is take a peak at his career batting splits to see if he’d be useful in some sort of second base platoon, in case Toronto wanted to attempt milking some extra value out of a pile of ‘meh’ by running a timeshare at the keystone sack. Getz’ career platoon split is almost non-existent though, and it’s actually slightly negative. In 1546 career plate appearances, Getz has a .284 wOBA vs. LHP and a .278 wOBA vs. RHP. He’s basically useless in a platoon situation, right? Again, we need to regress his splits first!

So our best estimation for this hitters true platoon split would be 12.4%. In other words, he is probably 12.4% better against right handed pitching, as opposed to the 20% gap that he’s demonstrated in his career to date.

That construction might fit some people’s brains a bit better. It’s really a pretty simple and intuitive thing, this regression that most people ignore.

Just because Getz has demonstrated a negative batting split so far in his career doesn’t mean that he’s actually an abnormal lefty hitter. When we regress his splits properly, we see that he should be expected to hit right handed pitching 5.81% better than he’ll hit left handed pitching. This is only a couple of percentage points below the typically demonstrated batting split for left handed hitters. 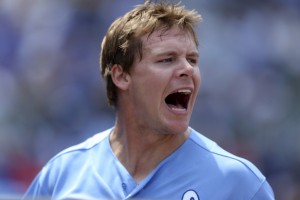 Now we can answer our catching question. Navarro’s regressed batting splits translate to a .295 wOBA against RHP, in light of his 2014 Steamer projection. Our best guess at Kratz’ wOBA skills against rightes would be the exact same – .295. For Thole, we would estimate a .300 mark. So regression turns a ~.020 point wOBA gap between Kratz and Navarro into zilch, and it cuts a .010 point wOBA gap between Navarro and Thole in half. If Toronto wanted to platoon catchers, it would probably be most optimal to play Navarro against lefties and Thole against righties, if they’re completely ignoring defense. Since we shouldn’t ignore defense, it’s probably best to play whoever the best defensive catcher is of the trio against right handed pitching. Or maybe whoever has the best working relationship with the relevant Blue Jays starter.

Some other things to glean from this information:

– Regressing splits doesn’t really shed much light onto the 2B situation. Goins, Getz, and Kawasaki all project relatively the same post-regression. Ignoring defense, you might want to lean towards Kawasaki vs. RHP over either Getz or Goins, and pick Getz against lefties. Izturis projects to hit better than all of them against both sides of pitching, but he also might be the worst defender (this depends on how you want to treat his defensive year in 2013. To me, it didn’t look like a UZR fluke. He looked awful during his first year on turf). Four equally awful options from all angles… talk about throwing shit at the wall.

– Steve Tolleson has some surprisingly lofty projections. The guy has made a minor league career out of getting on base, so I guess it’s not shocking. If anyone has an idea what he’s like defensively, I’d appreciate some insight in the comments.

– Based on this table, here are the best platoon situations at each position for Toronto (ignoring defense):

I guess that’s pretty much it. We might not have learned very much about the 2014 Blue Jays, but maybe you learned something about regressing platoon splits.

One last thought actually, and maybe just a small consideration. Adam Lind’s 2014 Steamer projection is buoyed by a solid 2013 where he was a platoon player for part of the year. I was thinking along the way here that it might not be strictly appropriate to use his career % of PA against LHP to centre his true talent regressed platoon split over that 2014 Steamer wOBA (since his % of PA in 2013 and 2014 will probably be much lower than his career %). If anyone has any insight into this, please comment. Actually, if anybody has any solid insight into how they think the regressed platoon splits in general would be most appropriately applied to a player’s single 2014 Steamer projection, I would appreciate the education.