Home » Featured » Logan Forsythe Is Available! Be Still, My Heart!

Logan Forsythe Is Available! Be Still, My Heart!

The baseball Twitterverse’s teenage reporting phenom Chris Cotillo has informed the world that “a number of teams” have called the Padres to ask about the availability of Logan Forsythe.

As MLBTR’s Jeff Todd explains, Forsythe is superfluous in San Diego. The Padres have Headley at 3rd and Jeb Jerko at 2nd, which functionally plugs up the only two positions where Forsythe would seem to have a chance to be a productive player. He has dabbled at shortstop and in the outfield, but I don’t believe he has near the defensive chops required for the former position, and his stick probably doesn’t play at the latter. San Diego also has Alexi Amarista, a comparably valuable utility piece, on their 25 man roster.

Aside from not having room for him to play, there are other reasons why San Diego might deal Forsythe. The main reason being that he’s not that great. 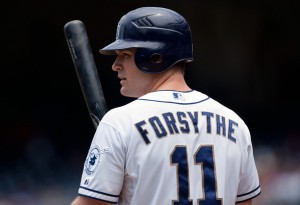 Logan Forsythe. Not that great. Trade for him!

Forsythe was downright bad last season, in his age 26 year. He posted a 73 wRC+ and exactly zero fWAR in 243 plate appearances. In 2011, his first big league year, he was worth just 0.4 wins in 169 PA, failing to hit even one home run and putting up a measly 60 wRC+. In between those two seasons he showed something though – a 110 wRC+ and 1.3 fWAR in 350 PA. In that 2012 campaign, which started late due to a broken foot bone, Forsythe slashed .273/.343/.390 (which is probably a lot more impressive when you remember to factor in both the current run environment and Petco) with six dingers and eight swipes.

For one thing, he’d probably be an upgrade at 2nd base. Here are the Steamer and Oliver projections of Forsythe, Goins, Getz, Izturis, and Kawasaki, all scaled to 600 PA:

A 1-1.5 win upgrade is nothing to sneeze at for a team that probably stands to win 85-87 games as currently constructed. The value of those marginal wins is highly leveraged. Something as small as Logan Forsythe could be the difference between making the playoffs or going home early (again).

Forsythe’s minor league statistics help explain why he projects comparably well next to the Jays currently rostered second basemen. Logan had an .839 career minor league OPS in just over 1400 PA, buoyed by a lofty .416 OBP.  He demonstrated an extremely patient approach in the minor leagues, walking in 16.5% of his plate appearances. This is reflected in his projections, which all “think” that his walk rate will trend toward 10% in 2014 as he enters his likely physical prime.

It should also be noted that Toronto, with Forsythe in the fold, could run out a fairly respectable platoon tandem at second base. Using 2014 Steamer projections and properly regressing platoon skill, none of Goins, Kawasaki, Getz, or Izturis would project to hit left handed pitching at a wOBA over .300. Izturis would be the highest with a measly .297 projected wOBA against LHP. Using the same method, Forsythe would project to hit lefties at a .312 mark. Pairing this offense with Izturis’ projected .303 mark against right handed pitching, or with the defense of Kawasaki and his projected .295 wOBA against righties, might yield even more marginal wins for Toronto.

Forsythe would also be cheap, in more ways than one. Jeff Todd on MLBTR speculates that San Diego could even try to flip Forsythe for as little as, “a southpaw bullpen piece or low level prospects”. The Padres would be unwise to ask for much more, since Forsythe isn’t really a “good” player, but for a team like Toronto with little more than nothing at second base, Forsythe should have enough positive attributes to make trading a low level prospect or a lefty reliever for him worth it. Depending on San Diego’s attitude towards Forsythe and the level of league wide interest in him, a controllable lefty like Luis Perez, who has some attractive stuff and has had a modicum of big league success, but is currently on the outside looking in for Toronto, might even interest the Padres.

Forsythe is still just a third year player to boot, so at league minimum he’s a non-factor towards to 2014 payroll, and he comes with three more years of arbitration control in case he has a mini breakout in 2014 and becomes a viable short term starter.

It’s understandable if Toronto has decided to earmark nearly all of their available payroll towards looking for rotation help, maybe Anthopoulos and friends are sitting in the weeds on a decent stack of cash waiting for the market to fall out from under Matt Garza, Ervin Santana, or Ubaldo Jimenez, but that doesn’t mean that the team absolutely has to run with Goins and Izturis at second base. Landing a guy like Logan Forsythe would be relatively cheap, and it would represent a small upgrade at second base, or at the very least, more depth in the shallow infield.