This will pe part 1 of a 3-part series that examines the glaring needs of the Jays from 2013-2014, and what Jays GM Alex Anthopoulos has done to go about fixing them. 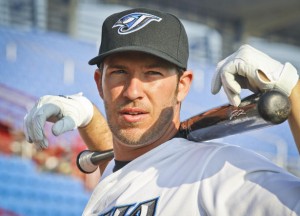 The Ever Handsome Arencibia

Task #1. Upgrade Catcher: I won’t spend time running J.P. Arencibia into the ground, that’s been done. Suffice to say, the Jays are moving on and there’s really no argument to be made this wasn’t necessary. After a historically bad 2013 and very public spats with the media, JPA was on a one-way ticket out of town. The only question was whether or not Jays G.M. Alex Anthopoulos was going to be able to get anything of value via trade before his inevitable non-tender. That answer turned out to be no and the Jays have turned the page, having chosen not to tender Arencibia a contract for 2014. Arencibia has since signed with the Rangers as a backup.

There were the obvious prize candidates available in Brian McCann and Carlos Ruiz, but the Jays were likely never serious players on McCann, who signed with the Yankees for big money and Ruiz back in Philadelphia where he was familiar. Other notable mid-level names out there were Jarrod Saltalamacchia(later signed in Miami), A.J. Pierzynski(later signed by Boston), and rumoured trade interest in Wilson Ramos. It’s hard to comment on hypothetical trades with Anthopoulos since his policy isn’t to comment, so there really no way to know how serious these talks were.

The Jays instead snagged Dioner Navarro(2 years/8 million), a capable catcher who had a breakout season in 2013 with the Cubs and has a good reputation for being a catcher what pitchers love to throw to. Breaking Blue’s Chris Brassard has already written about Navarro’s projections versus JPA. We know the Jays have him pencilled in as the everyday catcher so they are hoping for 110-120 games started, which would place him in the 2.2 fWAR range. At just 3 million dollars in 2014 and 5 million in 2015, if the Jays getting that kind of value from Navarro would be a positive value. Questions as to whether or not Navarro is capable of catching a full season are warranted, since he has been a backup for the past 4 seasons and hasn’t been a full time catcher since 2009 with the Rays. We’ll have to wait and see on that one. Navarro makes good contact, doesn’t strike out a ton and takes his walks, a concept very foreign to the Jays catching position for the past 3 seasons. His wOBA in 2013 was .370 and despite the Jays confidence in Navarro’s 2013 being in line with his true talent level based on their own internal metrics, for the reasons listed by Chris in his article, I am a little less optimistic. But, since the projections above are based on more realistic numbers for 2014 of .316 wOBA a lot closer to his career average of .301, they pass the initial sniff test. 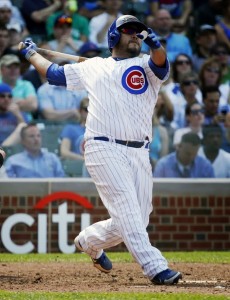 Adding to the overall catching scenario though, are the Jays possible backups. Since AA traded from his bullpen depth that sent RP Brad Lincoln to the Phillies for C Erik Kratz and RP Bob Rasmussen, there’s a chance here to add more value behind the plate. Kratz is known as defense-first catcher; though not a liability with the bat (Steamer projected .307 wOBA in 2014). He’s 32, would only be making league minimum in 2014 on the major league roster, and is projected at 1.3 fWAR over 298 PA. That’s probably a bit generous as he likely wouldn’t quite see that much playing time, but at 200 AB roughly .08-0.9 fWAR would be huge for a backup catcher. Before you start screaming about projections, that’s not out of line with what he did over the past two years in Philadelphia, putting up 1.3 and 0.7 WAR in 2012 and 2013 respectively in only 157 and 218 PA as a backup for Ruiz. Even 0.5 WAR from your backup at league minimum that would be a positive value, so I see no downside with Kratz unless of course he can’t catch a knuckleball. Kratz is under team control through 2018 and if he spends all year on the bench as they backup in 2014 would be entering his first of 4 arbitration years in 2015 as a Super 2 qualifier.

The incumbent backup is Josh Thole, R.A. Dickey’s personal catcher. Thole was pretty awful with the bat in 2013 and while there’s reason to expect regression to better things offensively in 2014, being better than awful still only means about replacement level or slightly worse at best. On his side, when you’re a knuckleball catcher, chances are you’re a plus defensively or you wouldn’t be catching a knuckleball. I may be oversimplifying, but when a guy throws 85% knuckleballs, there probably isn’t too much difficulty in game calling since you pretty much just put down the sign and then try to catch the butterfly more often than not. Framing is also probably very difficult so when I see Fangraphs having him as a positive defensive catcher every year, I tend to believe it. Thole is more in line with what you’d expect from a backup catcher, below average offense (career .288 wOBA) and above average defense. He will earn 1.25 million in 2014 should he be retained as the backup, has a club option for 2015 and would still be arbitration eligible in 2016 as a Super 2 qualifier.

After all was said and done, AA didn’t land a big fish but realistically he was never even fishing for one. AA just doesn’t like doing business in the upper tier or even the mid-tier of the free agent market. Navarro and Kratz both represent the types of players that AA covets. Navarro, a capable player with some upside and minimal risk signed to a team friendly deal, and Kratz, under team control for multiple years for minimal cost in an up-the-middle position. 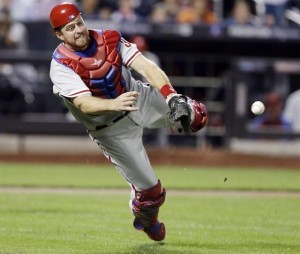 There’s flexibility here too. Kratz does have options, so even if he doesn’t make the team ahead of Thole, he won’t be a lost asset and will provide depth at a position that is oft injured. Since the Jays also have defensive whiz A.J Jimenez in the minors who will be playing every day, the Jays could keep Thole to backup Navarro with Kratz in AAA as the everyday starter, allowing Jimenez to start everyday in AA, or have Kratz as the backup with the big club and Jimenez playing every day in AAA. This means Thole would be dealt for whatever return someone is willing to give (probably cash or Player To Be Named Later) or just waived and let go for nothing.

The Jays made improvements behind the plate in both the subtraction of JPA and the addition of Navarro as the full time catcher and Kratz to compete with Thole at backup. Steamer projections are not gospel, but the tandem of Navarro/Kratz would project to be around 3 WAR, assuming Kratz can catch a knuckleball. 3 WAR from your catchers for 3 million plus league minimum is a very positive value scenario. Navarro/Thole projects to be about whatever Navarro is worth, since Thole is projected at replacement level or slightly worse.

Navarro will cost 8 million over the next two years. JPA is projected at 1 WAR in 2014 with 360 PA, and if he had been a starter with the Jays at 500+ PA, he was at 1.7. He would have cost similar dollars to Navarro through arbitration for the same period. Navarro gets on base, doesn’t strike out a ton and doesn’t have the glaring weaknesses in his defensive game that JPA does. JPA has power, and that’s it. Is it safe to say a tandem of Navarro/Kratz or Navarro /Thole provides more wins than JPA/Thole or JPA/Kratz over the next two years? Probably. These were not the types of moves that have drastic differences in the win column every year and there were clearly other options available that would have added possibly 3-4 wins over JPA, but certainly not at that cost of Navarro. But, with Navarro, even if that difference is only 1 win per year, when the dollars spent are the same and you’ve eliminated weaknesses in the catching position, that’s still a good thing.