This is the second of 6 parts in my series of ranking MLB starting rotations. The first part can be found here. The rankings will be largely based off of my projections, with some manual fiddling. Pitchers who are all but guaranteed spots in their respective rotations will be included, and then any other spots will be filled with the best pitcher available. The projections are considered to be in a vacuum (no park factors, team defense, or catcher help). This makes it very easy to compare pitchers on different teams. The order of the rotation is by my projected ERA’s (not the actual rotation).

The Milwaukee Brewers have reportedly agreed to terms with Matt Garza. Garza is projected for a 3.79 ERA. All of his estimators were right around this mark last year. The signing moves the Brewers into 28th spot, bumping the Astros and Twins down.

Both the projection system and I believe Gausman is ready to lead the Orioles pitching staff, even if his innings are limited. He had a good 3.68 xxFIP and excellent 3.24 TIPS and 3.04 xFIP. It was only in just under 50 IP and some of the time in the bullpen, so some regression was in order, but a 3.81 ERA in a full time starter job seems very reasonable. He’s the sure one to watch in this rotation. Pitch level data (both xxFIP and TIPS) like Norris a little better than the more common stats and the projection does as well to an extent. He should be right around average next year. All of Chen’s estimators hover around the 4.00 mark, and his projection agrees. Tillman is due for a little bit of regression, after his decent year last year, but it wouldn’t surprise me to see him below a 4.00 ERA. I don’t think anyone is disagreeing with the projection system on Miguel Gonzalez either. 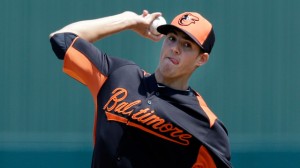 As I’m sure we all know, the Blue Jays rotation can’t do much worse than last year. Pitch level data suggests Dickey will bounce back in a big way, but the projection might be a little high due to the elimination of framing. Dickey is one of the few pitchers that would consistently be harder to frame due to the movement of his pitches, and he will likely lose more calls than he gains again. However, there is also the Dickey Effect to consider, which makes the following pitchers perform better. So the 3.8 WAR projected contribution does not seem unreasonable at all. Esmil Rogers had a mediocre season last year with a 4.39 xxFIP and 4.39 TIPS. xFIP suggested a better 4.06. When taking in his prior two years, the projection system likes him a little better than last year and puts him in line with that xFIP. Redmond had a decent start to his Blue Jay career last year with a 3.72 TIPS and SIERA. His xxFIP and xFIP were a little higher at 4.16 and 4.21. The projection system goes with 4.17 and his TIPS and SIERA suggest there is room for some upside. Buehrle’s TIPS and xxFIP were quite high last year, 4.45 and 4.57. Buehrle is a different breed of pitcher however, he lives off his ability to get extra strike calls and play excellent defense while holding runners. The projection takes his defense into account for his 4.22 ERA, but there is room for upside with his “frameability”. Morrow did not have a great season last year at all with his lowest estimators being TIPS and SIERA at 4.39. Morrow has had success in the past and the projection system takes this into account. There is definitely the potential to be an above average pitcher. If you are interested, other possibilities for the rotation that are projected include J.A. Happ (4.24), McGowan (4.03 which is not adjusted to the rotation), and Drabek (4.65). Stroman is likely the best option for the back of the rotation, I don’t have him projected, but Steamer has him just above average so there is some upside for the rotation. Hutchison is also not projected, but Steamer likes him as well.

Samardzija is one of the games most talented pitchers and is likely in for his best season as a starter (ERA wise) in 2014. He is rumoured to be involved in some trade discussions, and his potential loss would hurt the Cubs rotation for next year. Arrieta is the guy to watch for me. He has yet to break out and show his true potential, even after his 3.65 xFIP in 2012. His ERA/FIP/xFIP were all around 4.70 last year but his TIPS was 4.00 and his xFIP was even better at 3.93. If he has a spot in the rotation, he could be a real breakout candidate, relatively speaking. The lefty Rusin should also have a decent year in 2014 according to the projection system. I’m not sure what it is in his profile, but it likes something more than his prior results suggest! He may be the benefactor of too much positive regression. Justin Grimm (4.28) and the unprojected Arodys Vizcaino provide some upside if Wood doesn’t live up to his task as his projections suggest.

Richards is one of the prime breakout candidates this season. After spot starting out of the bullpen for awhile, Richards should be given a full time spot int he rotation, and my projections expect him to shine. Richards posted a 3.54 xxFIP last year as well as a 3.58 xFIP. Moving towards his prime (he is 25), Breaking Blue Projections see something right along those lines as a full time starter. Hector Santiago is another curious name. Santiago has posted excellent ERAs (3.33 and 3.56) over the past two years with bad xFIPs (4.40 and 4.65). His xxFIP last year was 4.06, but he also saved 6 runs with his defense. Being a lefty, he is expected to save a run or two by limiting the running game, and his positive defense is expected to continue to a lesser extent. Santiago is also entering his prime and received a little boost for that. Wilson had a great year again last year, but is expected to regress towards his predictive peripherals (3.93 xFIP, 4.09 xxFIP). Blanton is one of the weirdest cases around and we should be very tentative when looking at his projections. He has consistently been projected at average or above by multiple projection systems, but he never performs to his predictive stats lately. The potential is still there, however, to come back to average. Jered Weaver may shock you at 4.45 ERA, but it shouldn’t. His velocity is at an all time low and a lot of signs are pointing to heavy regression. He has been a consistent DIPS beater throughout his career however, and if you believe in that you can be my guest. His best years are definitely behind him though. 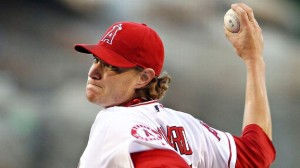 You may be surprised to see the Sox so low and so am I. The projections don’t like the staff as much as Steamer does. Lester is expected to regress after posting a 4.12 xxFIP last year and so is Peavy after posting a 4.39 xxFIP. Buchholz is also clearly in for a regression, but will still likely be the best of the group. Doubront likely has the most potential to break out and he’s definitely the one to keep an eye on. After a horrid 2012, Lackey bounced back last year with a nice 3.55 TIPS, 3.49 xFIP, and 3.68 xxFIP. The projections obviously need to take 2012 into account however, so there is some risk there, but also potential for some good upside. 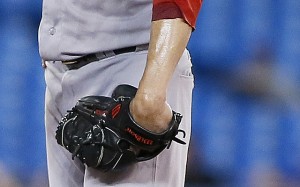 Look for the next part of the list soon! With ranks 16-20. Make a guess of the next 5 teams in the comments!