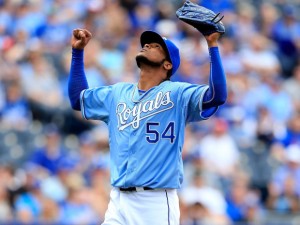 EDIT: Shi Davidi has recently said the deal is not yet complete. Santana has given other teams until 5:00 pm EST to best the Jays’ offer.

EDIT #2: The 5 pm deadline turned out to be bull. Morosi is saying that Santana is prepared to wait “days” before signing. All eyes are on you, Ervin.

The Toronto Blue Jays and Ervin Santana have reportedly agreed on a one year, $14M deal as reported first by Dionisio Soldevila. The best publicly available system for pitchers, Steamer, has Ervin at 2.9 WAR over 192 innings with a 3.99 ERA and 3.86 FIP. My CC projections have Santana at a 3.92 ERA over 188 IP. Santana is coming off a 3.0 WAR and 3.69 xFIP season. At an evaluation of 1 WAR being worth $7.5M, and Santana being projected at over 2.0 WAR, he’d be projected to provide some surplus at this contract. There is also the argument that the Jays are at a point on the marginal win curve where the value of adding another win almost doubles or triples if it gets you into the playoffs due to added playoff revenue.

Santana has always had the label as being HR prone. HR prone should really mean fly ball prone, since pitchers have limited control over HR/FB. Santana has been a flyball pitcher in the past and has a career 40.7 FB%. Due to the high HR park factors at the Rogers Centre, a flyball pitcher is not exactly what is desired. However, Santana changed his ways last year. His FB% was at a career best (low) 32.9%, while his GB% reached a career best (high) 46.2%. The Jays will be counting on those numbers repeating themselves if Santana is to perform well in Toronto. League average GB% was 44.5% last year and FB% was 34.3%. This was Santana’s first time on the right side of these numbers.

Overall, a nice add by the Jays with some good upside if true. The Jays may also be able to turn the lost second round pick this year into a comp pick the following year if Santana leaves with a another qualifying offer. The strategy of waiting seems to have paid off for Alex.