The Value of Draft Picks

With the recent reluctance of teams to offer lucrative contracts to players tied to draft pick compensation, much has been made about the value of the draft picks that are received and given up. Many articles have been through the process of putting value on draft picks and here’s my take.

I went through the first six rounds of every MLB draft from 1993-2005. These years were chosen to a) try and stay within the same scouting level era, and b) ensure that every player included has completed his arbitration years. Total WAR at each pick before the player’s age 30 year was summed. Age 30 was assumed to be the year the player reached free agency on average. The raw data looked like this: 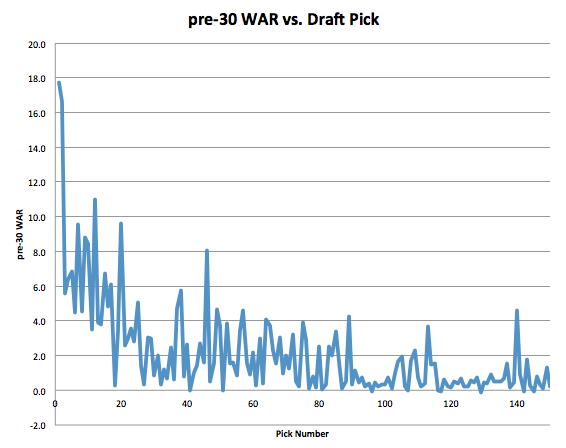 It may be obvious to many of you that we can’t simply say “the number 18 pick is worth 0.3 WAR and the number 20 pick is worth 9.6!” Some curve fitting and smoothing needs to be applied. I also went ahead and took the liberty of extending the data past the sixth round. 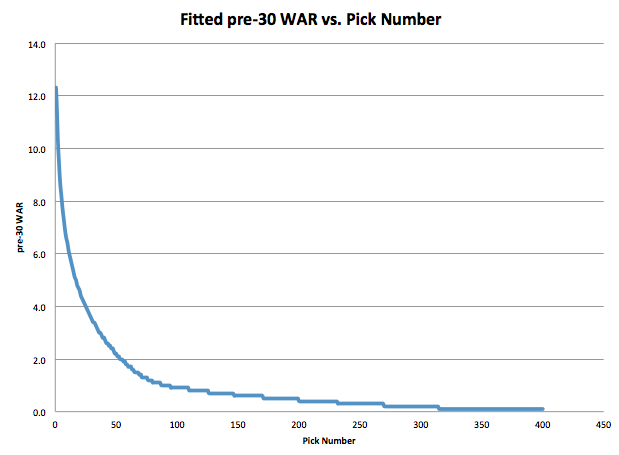 Looks like a very nice curve! It gives the first pick in the draft a production of 12.3 WAR. Now we need to put this into monetary value. We could just simply apply the $7.5M/WAR evaluation, but there are two other things that need to be considered; we need to include the slot value of the pick (the signing bonus of the player) and the average arbitration contracts in todays’ dollars. The slot was easy and I just took 2013’s values. The arbitration earnings were a little harder. After a few case studies and conversion into today’s dollars, I came up with a value of $1.25M/WAR for arbitration periods. Here’s the value of the first round:

These numbers may seem a lot higher than you would have thought, and this may be the case because you automatically discount the future value. Major League teams do this too. 1 win in 2014 is worth more to them in 2020 because they discount the future. Not every team would discount evenly though. A team like the Blue Jays cares about the now more than the Astros do. The Jays may have a yearly 20% discount rate while the Astros may have a 2% annual discount rate. No one knows for certain, unless they work for the team, and they might not even have a concrete number even then. I took a shot in the dark and assumed a league wide average 9% annual discount rate on average. I also assumed that the average of the WAR would take place 5 years after the draft. Here is the full list and current discounted values of every draft pick. WAR has been rounded to one decimal point, so don’t assume there is a drop at a certain pick like 94-95, it is still gradual. Picks after 400 are assumed to have negligible value.

Looking at this table, a pick received from letting a qualified free agent sign elsewhere is worth around $11.5M. It’s also important to keep in mind that $/WAR keeps increasing every year. The 9% discount could be negated with a 9% inflation. The 2015 draft picks will probably be valued less right now due to human nature, but they’ll be worth more than the 2014 picks were at the same point of reference (Mar 12, 2014 vs. Mar 12, 2015). If we assume 9% discount and 9% inflation, we could say that each future draft is approximately equal to each other at a given point in time. For example, right now pick 25 in 2015 is equal to owning pick 25 in 2015 or 2016. At this point next year, however, the value of the picks will have increased the 9% inflation rate or so and the temporal discount will be gone.

If you have any comments/concerns, leave a comment below. Enjoy.