Projection system releases have become a staple of baseball’s preseason period and there are several excellent offerings available. Some are more complicated than others. All involve weighing past seasons and some (notably PECOTA) incorporate comparisons to past player career paths. However, they tend to perform very similarly, a reminder that baseball is at its core highly variable. 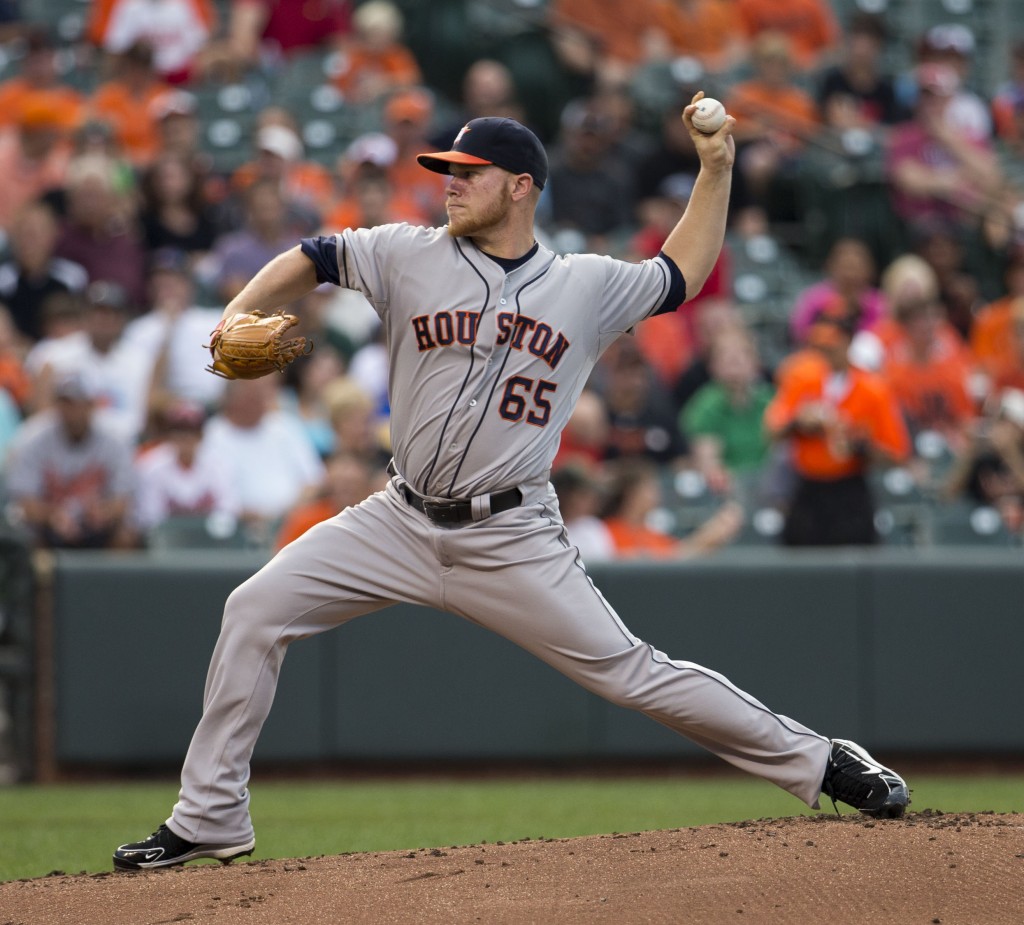 Photo taken by Keith Allison (https://www.flickr.com/photos/keithallison). The FRIAS method came close to predicting Brett Oberholtzer’s exact strikeout and walk rates in 2014. It projects him for a serviceable 4.20 FIP in 2015.

The indicators I look at most often when analyzing a pitcher’s season (or often a partial season) are plate discipline stats. When a pitcher delivers the ball to the plate, there are three basic outcomes: strike, ball, and ball in play. Plate discipline stats expand those outcomes to capture the batter-pitcher dynamic. Fangraphs provides nine such metrics, which are derived both directly from Pitch F/X and from Baseball Info Solutions (BIS).

Zone% is the percentage of pitches in the strike zone and F-Strike% is the percentage of plate appearances that start with strikes. The two stats should intuitively measure a pitcher’s ability to limit walks, but that does not necessarily hold up. Zone% barely correlates with BB% (I found an R-squared of .03537 in 90+ inning seasons from 2007-2014). Throwing the ball in the strike zone may be an essential trait to pitching but knowing that a Major League pitcher has a certain Zone% doesn’t tell us much about limiting walks, except at the extremes. F-Strike% fares much better. One reason is likely that a pitcher almost always tries to throw a strike on the first pitch, while there are many situations in a game when a pitcher tries to throw the ball outside of the strike zone. Hiroki Kuroda and Zack Greinke in particular have consistently maintained excellent walk rates with below-average Zone%.

Three fundamental plate discipline stats can also be referenced using Baseball Prospectus’s Pitch F/X leaderboards (and can be calculated on your own with the raw Pitch F/X data): Swing Rate, Whiffs/Swing and Fouls/Swing. Sorts and filters of that data can be done here.

True-talent indicators have already been created to estimate K% and BB% (including ones from Mike Podhorzer at Fangraphs and here last year by Chris Carruthers) and regressions that I’ve run are very similar in correlation and structure. We could keep adding explanatory variables but the utility of highly accurate xK% and xBB% numbers is questionable. Variables that are directly part of the outcomes, such as F-Strike% and SwStr%, would be increasingly present which reduces the metric’s ability to describe true-talent. A first-pitch strike tells us the pitcher threw a strike when he wanted to, but it also leads the pitcher closer away from a walk in that plate appearance. If we supposed that first-pitch strikes and swinging strikes occurred at random and were not a skill, then pitchers who generated swinging strikes and first-pitch strikes would still perform well at K% and BB%, and xK% and xBB%, but we wouldn’t have that the latter two describe true-talent.

A useful metric to have would express the following season’s FIP as a function of present year plate discipline stats. This would give us a clear idea of how meaningful a pitcher’s season is in terms of his outlook going forward, considering only that season. Carlos Carrasco was perhaps the great breakout pitcher story of 2014 (among a notably diverse cast of breakout pitchers) and many question whether he can continue pitching as he did in those ten starts down the stretch. The projection systems like him: Fangraphs Depth Charts (which aggregates Steamer and ZiPS) assigns a 3.61 ERA and 3.30 FIP. Steamer and ZiPS have very similar attitudes on Carrasco, as they do for most pitchers. Taking into account all of a player’s history is advantageous in modelling the future of players and Steamer and ZiPS do well in minimizes the error of their projections, and they don’t systematically undervalue breakout players. But it would be interesting to see what individual seasons have to say about succeeding seasons on their own.

To do this I came up with expected next-year strikeout, walk and home run rates and plugged those into FIP. My sample for this analysis is all seasons with 20+ innings pitched from 2007-2014. Later, I will remove the 2013-14 part of the sample to see how accurate my process was in projecting 2014.

Hmov: Average horizontal movement of pitch in inches, positive being towards left-handed batters from view of catcher.

Below is a residuals vs. fitted plot for xnyK%. The x-axis shows the predicted strikeout rate of each season in the sample (2007-2013 with at least 20 IP). The regression returned an adjusted R-squared of 0.5197 and a residual standard error of 0.367.

Below is the residuals vs. fitted plot for xnyBB%. The x-axis shows the predicted walk rate of each season in the sample (2007-2013 with at least 20 IP). The regression returned an adjusted R-squared of 0.3658 and a residual standard error of 0.2147.

The point labelled 1066 is Dontrelle Willis’ 2007 season. Despite posting a fairly average xnyBB% in 2007, his command profile collapsed in 2008, his first season with the Tigers, leading to a 28.7% rate in just 24 innings. The other major outliers were pitchers experiencing similarly mystifying downfalls. Outliers generated by small samples (20 innings pitched is a low standard) exist for all three of my peripheral predictors; however the predictors were derived using a weighting for innings pitched which should increase their accuracy.

It seems like every season a few pitchers give up a large number of home runs on huge HR/FB rates, are labelled as big gopher-ball risks and the sentiment sticks for subsequent seasons. Teams are sometimes influenced by this thinking too. Despite a fairly neutral 44.3% GB%, Joe Blanton gave up 29 home runs in 132.2 innings in 2013, leading the Angels to release Blanton in March 2014, eating $7.5MM. It was surprising that the Angels were able to trade Ervin Santana (to the Royals) following a season in which he allowed 39 home runs in 178 innings, but Kansas City wasn’t too concerned about that. Santana’s HR/FB regressed in the next two seasons to a normal rate as he posted very productive seasons with the Royals and Braves.

xFIP regresses every pitcher’s HR/FB to league-average and is demonstrably more predictive than FIP. Derek Carty of Baseball Prospectus in 2011 showed that it takes nearly ten seasons for HR/FB to stabilize. That is much, much more time than is needed for strikeout or walk rates.

With the fact that any xnyHR% will likely be heavily regressed in mind, here is the predictor I came up with (predicts home runs per hitter faced):

Below is a predicted vs. actual plot for xnyHR%. I used this instead of residuals vs. fitted since most people aren’t accustomed to the range of HR/TBF (HR/9 is much more common). My plots have revealed generally normal errors, with the more pronounced outliers representing poor performance. This is likely due to teams not continuing to use pitchers with very bad peripherals. The pitchers aren’t as bad as their peripherals represent and their seasonal stats should smooth out with more playing time but they are not given that opportunity. The outlier at the top of this chart is 2012 Brett Myers. He posted a below-average xnyHR% that was fueled by a 51.2% GB%. The next year, his first in Cleveland, Myers allowed a whopping 10 home runs in 97 batters faced and hasn’t been heard from since. A 10+% HR% was obviously not his true-talent reality.

So we now have predictors for the three components of FIP. This can be easily converted into per-9 measures and what I’ll call FRIAS (Future Regression of Ideal Analytic Statistics, a backronym to honour Carlos Frias, who came out of nowhere to post fantastic peripherals in 2014 that were recognized by the system; he’s projected 59th at a 3.22 FIP). Below is a table showing what 2014 results predict for 2015.

How Accurate was the FRIAS method in 2014?

These projections for 2015 seem to be in the right ballpark at first glance. The pitchers we all expect to be great have their skills validated, and the metric expects more of the same from 2014’s breakout pitchers (Carrasco, deGrom, Keuchel, etc). FRIAS takes some interesting stances and I’ll likely write about some of these cases in the future.

Then I compared these 2014 projections to the eventual real-life values of FIP, and to compare I also downloaded the Steamer and ZiPS pitching projections for 2014 from http://www.bbprojectionproject.com, which is managed by Will Larson.

The comparison was done using R^2, Mean Absolute Error (MAE, the average difference between predicted and actual) and Root Mean Square Error (the square root of the squares of the differences). The sample was pitchers who accumulated 20+ innings in 2013 (necessary to get an FRIAS reading) and 50+ innings in 2014 (to get a relatively stable FIP) Smaller values are better for the latter two, as they measure error. The 2014 projections for FRIAS, Steamer and ZiPS, and the 2013 xFIPs of the pitchers are below with the Absolute Error of each system for each player.

And then here are the R^2, MAE and RMSE values for the systems:

Steamer is superior in R^2, while FRIAS in superior in MAE and RMSE. It appears that the FRIAS method performed admirably for the 2014 season. ZiPS and Steamer have their advantages and project far more players (as they’re not limited to 20+ innings pitched in the previous season).

The top ten pitchers which FRIAS outperformed ZiPS and Steamer at projecting (in terms of the average AE of ZiPS and Steamer subtracted by the AE of FRIAS) were Brett Oberholtzer, Garrett Richards, Tanner Roark, Aaron Harang, Tom Koehler, Jason Vargas, Tyson Ross, Chris Archer, Jake Odorizzi and Dallas Keuchel. These pitchers showed something in 2013 that led to them producing better stats in 2014 than the larger sample of their career would indicate. ZiPS and Steamer believed Brett Oberholtzer to be replacement-level or worse, while my system foresaw an even 4.00 FIP. Oberholtzer bested us all with a 3.56 mark, which was entirely build on homer suppression (FRIAS nailed the K/BB marks with 5.89/1.90). 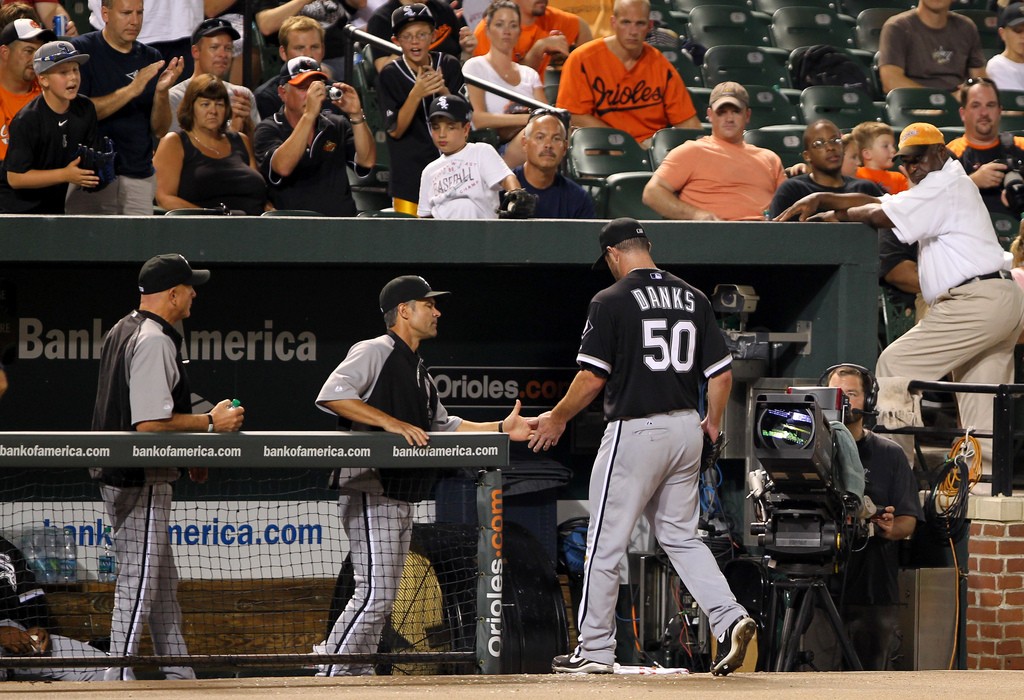 Photo taken by Keith Allison (https://www.flickr.com/photos/keithallison/). FRIAS was much more optimistic than other projection systems when it came to John Danks’ 2014. He fell apart in 2014 and was FRIAS’s third-worst miss.

The top ten pitchers the system missed relative to the other systems were Brad Peacock, Nick Tepesch, John Danks, Roberto Hernandez, Miguel Gonzalez, Danny Salazar, Kevin Correia, Homer Bailey, Alfredo Simon and Clay Buchholz. FRIAS didn’t love any of these guys other than Salazar, it just expected them to be decent-to-good and they weren’t. The top five guys and Correia totally imploded. The 2014 numbers foresee a similar line for the top miss, Peacock, with a 4.21 projected FIP.

So that is FRIAS. There are clear limitations to it, lack of ballpark and aging adjustments among them, but I believe its conciseness and transparency will make it a useful tool. I would like to write more about the quirks of its 2014 results as well as interesting things about its 2015 outputs.