Photo by Keith Allison (https://www.flickr.com/photos/keithallison/). Allen Webster is one of the Diamondbacks’ more interesting rotation candidates.

Most teams go to Spring Training with a roster battle or two to sort out. They need to pick a fifth starter, have a couple out-of-options pitchers trying to latch onto a middle relief role and need to decide on a utility infielder between three veterans. The 2015 Arizona Diamondbacks are not most teams. Their new Dave Stewart-led front office spent the offseason acquiring back-end starters by the truckload. Jeremy Hellickson, Allen Webster, Rubby De La Rosa, Robbie Ray and Yoan Lopez were brought in, joining Josh Collmenter, Trevor Cahill, Randall Delgado, Chase Anderson, Vidal Nuno, Archie Bradley, Andrew Chafin, Daniel Hudson, and the out-until-mid-season Bronson Arroyo and Patrick Corbin.

In this article I will profile the pitchers who are candidates to make the Diamondbacks rotation. Chafin and Nuno were recently removed from the competition by manager Chip Hale.

Josh Collmenter has already been named Arizona’s Opening Day starter. He has an odd over-the-top delivery that has led to him producing unexpectedly at a high level in four Major League seasons. While he’s probably not actually an above-average starter or an improvement over many of the other candidates, showing him respect for his past contributions by giving him this nod is fine.

It is also assumed that Jeremy Hellickson is a near-lock for a rotation spot given the organization gave up two decent prospects, Justin Williams and Andrew Velazquez, to acquire him. Williams has big raw power and Velazquez made headlines last year by reaching base in 74 consecutive games, a minor league record. However, guaranteeing Hellickson a spot would be a mistake. Now that his DIPS-beating ways of 2011-2012 are out of the picture, Hellickson just doesn’t appear to be very good. K-BB% rates have been consistently below-average for his career and he’s a pronounced fly-ball pitcher. Being named the 2011 American League Rookie of the Year and posting ERA-‘s of 76 and 80 in 2011 and 2012 respectively has undoubtedly skewed the public’s and the Diamondbacks’ perception of him. Fangraphs Depth Charts, which aggregate ZiPS and Steamer, foresee a 4.25 ERA and 4.22 FIP. Not terrible, but not better than the other candidates.

The Most Interesting Candidates

Let’s get to those other candidates. My personal favourite pitchers out of the group are Chase Anderson, Randall Delgado and Allen Webster.

Chase Anderson has a great changeup, one of the best in baseball, and he managed to ride it all the way through the minors despite very little prospect hype. Eno Sarris of Fangraphs has written extensively about the pitch and how Anderson manipulates it. A changeup is a versatile pitch; you can throw it in really count, many pitchers find it easy to control, and it has a reverse platoon split. Pitchers like Johan Santana, James Shields and Cole Hamels have in recent years pitched at an extremely high level while relying on the changeup as their go-to offering. Chase Anderson isn’t going to become one of those guys, but his arsenal, which also includes a useful curveball and a fastball with roughly league-average velocity and results, is enough for him to sustain a high level of performance. Last year in his rookie season, Anderson posted a 99 xFIP- in 21 starts. Steamer and ZiPS both expect him to trade a few strikeouts for fewer walks in 2015, remaining a league-average starter if not slightly worse. 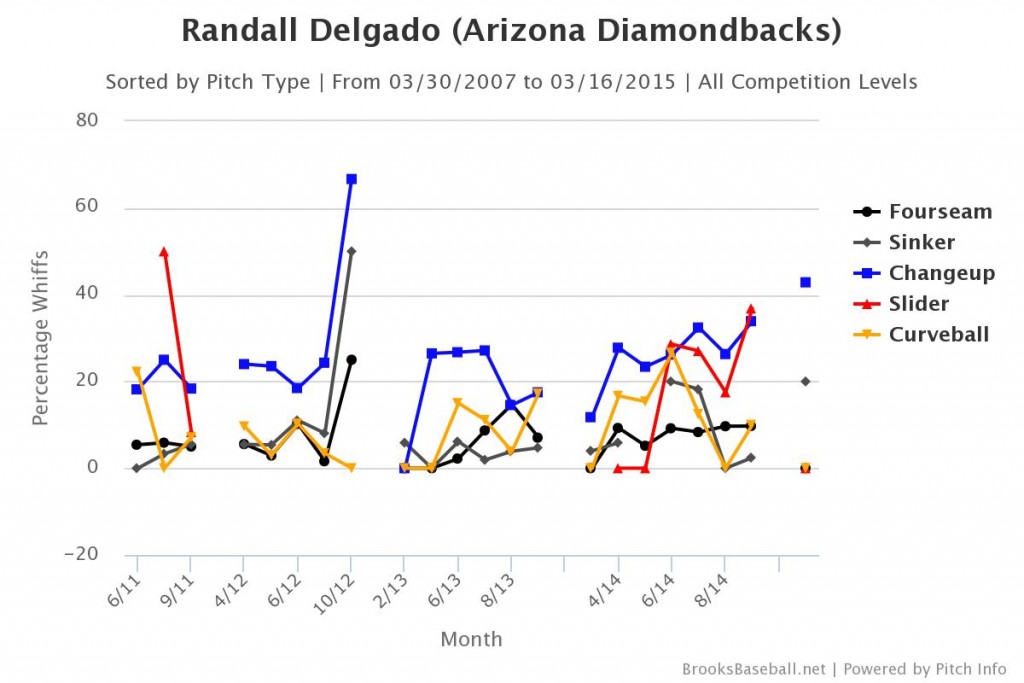 Randall Delgado’s new slider gave him a second elite pitch by whiffs/swing in 2015. Chart from the invaluable BrooksBaseball.net.

Randall Delgado and Allen Webster are pitchers who have yet to put much together at the Major League level but who have shown exciting pitch-specific peripherals and have extensive prospect pedigrees. Delgado spent most of 2015 in the Diamondbacks bullpen, making just four starts. The knock on Delgado has often been the lack of a quality breaking ball. He throws hard and has a good changeup, and has as times flashed a good curveball but has never really had a full starter’s arsenal. That may have changed on June 7th of last year when he started using a slider. The pitch went on to generate the fifth-best whiffs/swing among sliders (the changeup was eighth among changeups) in the Major Leagues (min. 100 pitches) at 57.8%. It also induced plenty of swings and helped balance out his fly-ball-oriented batted ball distribution. The negative is that he rarely threw it in the zone (18.5%), so his control of the pitch may need to improve to expect similar results going forward. The chart to the left illustrates his whiffs/swing per month — you can see that in 2015 he began using a slider (in red) that quickly jumped into elite effectiveness territory.

Allen Webster is a similar case, but his issues have been an alarming number of uncompetitive plate appearances which lead to walks and a failure to convert swinging strikes to strikeouts. Those deficiencies make his Major League statline look poor but they certainly sound fixable, especially since it’s just an 89.1 IP sample we’re talking about. His minor league stats display good strikeout totals and below-average but acceptable walk rates. It is his pitch outcomes that are particularly interesting. For his career (2013-14), his SwStr% and F-Strike% are above-average at 11.5% and 60.9%, respectively. FRIAS demonstrates that these two metrics are important in projecting K% and BB% going forward. Webster seems to lose focus at times and walk extra batters and fail to put batters away, but he does seem to have the ability to limit walk and get strikeouts. His slider, changeup and two-seamer appear from whiff rates and zone% to be quality offerings. I believe Allen Webster has the tools to succeed and the Diamondbacks should give him a shot.

Trevor Cahill was DFA’d by the team last June but went unclaimed, and according to what manager Chip Hale told the Arizona Republic on March 5th, has an inside track in this competition. He has had Major League success in the past and will make $12MM in 2015. He is a much different pitcher than Jeremy Hellickson but is similar in that nothing positively separates him from the field and his reputation was built on a great ERA run — in which he put up a 2.97 ERA against a 3.99 xFIP. Last season, he carried an 3.83 xFIP. Nothing has really changed about his value profile, although his method has changed as he appears to now strikes out more batters, walks more and induces fewer ground balls.

Archie Bradley seems to have been close to a call-up for years now, and he really has. After more than holding his own at 20 in AA in 2013, his development has slowed and a mid-season call-up looks more likely than an Opening Day rotation spot. Bradley has been very highly regarded for a long time, as pitchers that throw mid-90s with devastating curveballs often are. Control has always been his issue but he has shown flashes of adequate control in the past and looked great last year in the Arizona Fall League.

Vidal Nuno was acquired last July in the Brandon McCarthy and for a pitcher of no pedigree actually pitched well for them down the stretch (3.88 xFIP in 14 starts). He has a full arsenal of pitches and gets the most out of a below-average fastball. At the same time, there’s nothing particularly exciting about him except for plenty of cheap team control remaining. Chip Hale recently announced that Nuno is no longer in the competition and he will likely fill the role of AAA depth nicely for the team.

We often assume that pitchers will return quickly after recovering from Tommy John surgery and work at the same level as previously. Daniel Hudson is a cautionary tale in that regard. After getting the surgery mid-season in 2012, Hudson re-injured his UCL in 2013 while rehabbing and needed the procedure done over again. Miraculously, however, he has returned and threw 2.2 innings in 2014. It’s hard to know how good he will be going forward and Arizona will surely take a slow approach with him. Before the injury he was a decent mid-rotation starter for a short time, putting up 4.8 fWAR in 2011. Chip Hale has already said Hudson will make the team in some capacity and he has been mediocre in two appearances this spring.

Rubby De La Rosa seems to look more promising when he’s pitching than his stats indicate. He averaged 94.0 mph on the fastball last year and it’s always been said that he has a big arm, but he’s yet to develop an effective out pitch and the hard fastball doesn’t have special peripherals. With that said, he’s clearly talented and struck out his share of batters in the minor leagues. Something will need to happen for De La Rosa to unlock more strikeouts and I don’t view him among the top five Diamondbacks starters at this moment.

Robbie Ray was traded to Detroit as the central piece of the Doug Fister return and was seen as a very suspect prospect to built a trade around. But given Detroit General Manager Dave Dombrowski’s reputation for winning trades, Ray’s abilities were probably overrated as people looked for reasons the Tigers wanted him so badly. He was never widely considered a top 100 prospect and totally imploded at the Major League level in 2014. The Tigers lost their faith in him as they flipped Ray to Arizona this offseason. I’d like to see Ray re-establish himself at the AAA level before trying again in the Majors.

Not much is known about Yoan Lopez. Arizona gave the 21-year-old an $8.25MM signing bonus (he fell under the capped international bonus system and Arizona blew through their cap to sign him) and according to MLB.com’s Jesse Sanchez, he has a full arsenal of pitches and throws a mid-90s fastball that has been clocked at 100 during workouts. Nick Piecoro of the Arizona Republic reports that his fastball was 90-92 in two scoreless innings for his second Cactus League appearance, on Friday. If he can ramp his stuff up to what Arizona saw during workouts and spot his fastball effectively, maybe he can turn into a serious rotation candidate.

That was a lot of pitchers! While Arizona has no real ace or even a #2/3 type starter, they have plenty of young pitching depth and won’t have to worry about trotting out sub-replacement level starters for the next couple seasons.

A Pitcher! A Pitcher! My Kingdom for a Pitcher!
FRIAS Case Study: Ervin Santana