Yesterday, I made two posts that investigated the relationship between the outcomes of plate appearances and the values of the pitches that comprise them. The first detailed a game score variant that is based on run values I calculated for pitch outcomes and the second went into more depth on the meaning of swinging strikes compared to called and fouled strikes.

Tom Tango suggested that I integrate the count into my analysis. I was grateful for his feedback and eager to investigate this issue further, from the right perspective. Strike three is the most costly strike to the hitter, and swinging strikes are more prominent than looking strikes with two strikes, so their value as I calculated would be artificially inflated by circumstance. Hitters are similarly less likely to swing and miss with zero strikes than with two strikes. Swinging strikes are more likely to come in situations where they would be more valuable. If they were to arise in other situations more often (with zero or one strike), the value as I calculated it would go down. Figure 1 shows the average count of each pitch outcome used in my analysis. Called strikes, occurring very often with no strikes when the batter feels no pressure to swing, have the lowest average total of both balls and strikes. 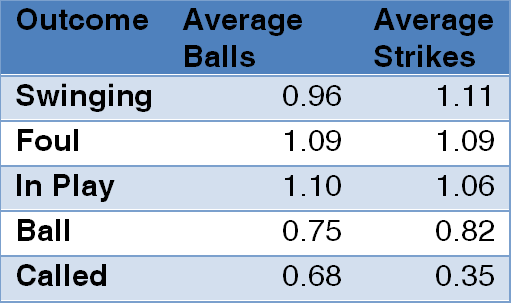 To dig deeper and find more concrete run values for pitch outcomes, I decided to create a count/outcome table to illustrate the value of each pitch outcome in each count compared to the average of pitch outcomes thrown in the specific counts. The values should be compared to the average value to account for the impact of the previous pitches. A ball has less impact on a 3-0 count than on a 2-0 count, since the plate appearance is already so slanted towards a walk. To create the table, I added a layer to my Pitchf/x analysis, isolating for the count of the pitches analyzed in addition to the plate appearance and pitch outcomes. The table is below and the run values are from the batter’s perspective (favouring runs being scored).

That is a lot of information! The table tells us that swinging strikes are uniformly the preferable pitch for a pitcher, which makes sense.  While it looks like fouls break about even with called strikes in zero- or one-strike counts, they’re close to neutral with two strikes (slightly favouring the batter, who likely is adding to his intel on the pitcher with each foul — more on two-strike fouls later). Interestingly, swinging strikes do lead to a distinct advantage to the pitcher when they are the first pitch of the plate appearance (worth 0.033 more runs to the pitcher). There are many possible explanations for this. Perhaps a certain (inferior) type of hitter is more likely to swing and miss on the first pitch and we’re capturing the general abilities of the hitter in question, or maybe a first-pitch swinging strike is a sign that the hitter is particularly unprepared in this plate appearance, a harbinger of things to come later. There are probably many influences on this effect.

I have the total number of pitches that occurred in each count, and I used this to create a weighted average for each pitch type, again from the batter’s perspective. For example, the value of a called strike is the average run value in each count, weighted by the number of called strikes thrown in the specific counts. Here are the values:

It is now clear why Tango says that two-strike fouls should be removed from the value equation. Fouls are not actually worth so little the pitcher (they are valuable with zero and one strikes), it’s just that they occur often with two strikes, at which point their value is negligible (and actually slightly negative to the pitcher!). Fouls not leading to strikeouts is somewhat of a quirk in the rules and shouldn’t reflect on the value of every foul — they’re essentially a different type of outcome from a value perspective.

I took out the two-strike fouls and received these run values:

This looks more reasonable. It makes sense to me that fouls are still less valuable, since they can’t generate a strikeout, making them miss out on a very positive event for the pitcher. But called and swinging strikes draw fairly even.

Swinging strikes are a great thing for a pitcher to generate as they are very important to getting the third strike (the hardest one to get, since the batter is so incentivized to avoid it and stay in the box). They do have a special purpose and getting swinging strikes consistently reflects greatly on a pitcher. But there are issues with applying generalized pitch-by-pitch values to all swinging strikes and my count/outcome table contains more nuanced information when it comes to the value of pitch outcomes. I will likely come out with a new post soon detailing changes to my game score variant, poGS, considering these new findings.