An Early Review of the Miguel Castro and Roberto Osuna Experiment

It’s difficult to talk critically about anything that happens in three weeks of baseball. Many fans and analysts maintain that Memorial Day is when the season really starts to take shape and statistics accumulated can be analyzed with some rigor. They are generally correct. However, with data becoming increasingly granular, we can do more with small samples. I decided to take a look at what Miguel Castro and Roberto Osuna have been up to and explain why it’s important that they succeed.

The decision to carry Miguel Castro and Roberto Osuna in their Opening Day bullpen put the Blue Jays in a rather unprecedented position and ignited conversations about player development and asset management. There are two schools of thought on when to promote pitching prospects. One, young pitchers can take a while to refine their skills so teams can extract the most value out of their six years of control by waiting until they’ve mastered the minor leagues. Two, young pitchers get hurt often so teams should get them to the Major Leagues once they’re capable of contributing. With Castro and Osuna (as well as Norris and Sanchez), the Blue Jays decided to take the latter approach. In most/all other organizations, Osuna would be starting games in double-A and Castro in high-A.

This approach gives the Blue Jays two useful relievers immediately. However, the pitchers, Osuna especially, may have projected as starters long-term and this likely holds back their development as starting pitchers. I could see Osuna being stretched out next season to get back on track as a starter, perhaps starting the year in AAA Buffalo. He had considerable success as a starter in the minor leagues and despite being younger than Castro, was probably expected to make the majors as a starter sooner. Having been promoted to the major leagues, it will be more difficult for either to spend multiple seasons back in the minors developing as a starter because they are on the 40-man roster now and will use up option years if demoted.

It’s hard to analyze past information to see how young starting pitching prospects fare after relieving for at least a year before being re-integrated into a rotation because cases are few and far between, especially considering prospects without high-minors experience. In recent years, pitchers like Neftali Feliz and Daniel Bard have struggled mightily when converting to starters, while others such as CJ Wilson and Chris Sale have succeeded. Each of these pitchers were in situations so different from Toronto’s young arms that it’s difficult to draw parallels.

To make promoting Castro and Osuna worth it, in terms of the potential cost to their future development as starters, the service time cost of using them as relievers instead of starters, and the value differential between them and other relief options the Blue Jays have, the two pitchers will need to be very good relievers.

What have we learned about these two youngsters so far? Most evident is that both throw really hard. Castro has averaged 97.5 mph on his four-seam and Osuna 95.5, which land them in the top 30 pitchers with fifty pitches thrown, placing them among elite pitchers. With some control and movement or deception, a major league reliever can generally subsist mostly on that type of fastball. On the surface, Osuna has excelled in his 10.1 innings with an 84 xFIP- and Castro has struggled with a 121 xFIP- in 9.2 innings. Their samples have not passed stabilization points for strikeout, walk and ground ball rates though (Russell Carlton found in 2013 that strikeout, walk and ground balls reach a reliability of .70 after 70 batters faced, 170 batters faced and 70 balls in play, respectively) and so xFIP-, while a great stat for evaluating pitching talent, is subject to a lot of noise in ~10 IP. According to Minor League Central, Castro and Osuna had roughly average ground ball rates in the minors, so I wouldn’t be alarmed by the extreme fly ball slants they’ve taken in the majors.

The Steamer projection system had a hard time evaluating the two before the season and has, presumably after recording their velocities and the fact that they aren’t totally wild, adjusted to project Osuna for a 3.43 FIP and Castro a 3.95 FIP. These projections don’t point to them being special relievers who are notably better than the Blue Jays’ minor league relief depth; guys like Matt West, Preston Guilmet and Steve Delabar project similarly. KATOH, a system that uses only minor league stats to project major league performance, is particularly high on Osuna. It forecasts 13.7 WAR through age 28. This suggests that Osuna has advanced major league skills. Believing in Castro relies on more faith in scouting-based analysis, as KATOH only forsees 2.6 WAR through age 28 for him.

We have plate discipline stats which can be useful in smaller samples. Castro has an 8.2% SwStr% that would be low for a high-leverage reliever. Osuna’s 14.2% is fantastic. Reliever effectiveness and swinging strikes go hand-in-hand.

Figure 1 describes that relationship. Even in a small one-year sample, the fit is noticeable. 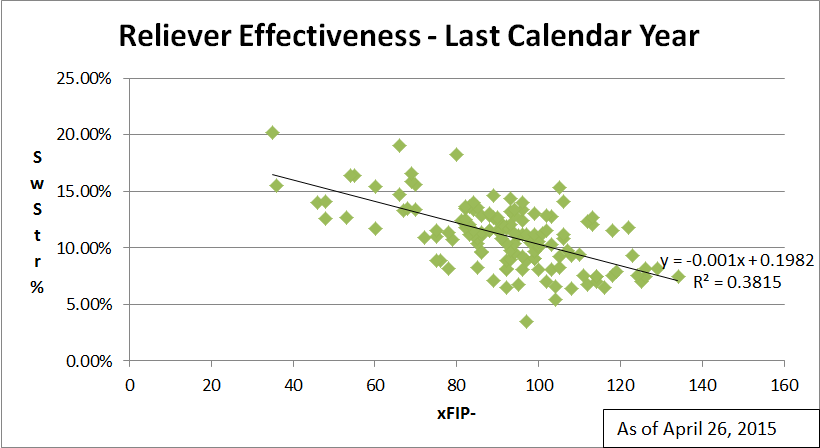 Of course, Castro’s 134 pitch sample is a lot smaller than the pitchers in the one-year sample and his 8.2% SwStr% would rise very quickly with a couple dominant appearances. But I decided to investigate further and check the rate at which good relievers have months of low swinging strike rates. I found the monthly swinging strike rates of each of the top 50 relievers (by xFIP-, min. 100 IP) during 2013-2014. The median reliever in this group had an 81.5 xFIP-.

Figure 2, a histogram with an overlaying cumulative line,  shows my findings. To be considered, a month needed to include at least 130 pitches. The histogram looks like what you’d expect to get from a binomial distribution given a .135 probability over 183 trials (the average monthly SwStr% and number of pitches).

If one assumed that Castro and Osuna were top relievers, as their circumstances require them to be, then Castro’s month would be better than 7.5% of these months by SwStr%. Osuna’s month is healthy by this method of comparison. Castro’s rate is not an encouraging sign on its own, but it may not be a big deal as it’s well within the range at which his true-talent SwStr% could be much higher and suppressed by random chance. While interesting and potentially important, we can’t make grand conclusions here.

Something that has set the two pitchers apart from other relievers and is genuinely happening is their use of three pitches. Castro has used his slider 20.2% of the time and his change-up 18.5%, while Osuna’s respective rates are 12.8% and 24.8%. Most relievers only rely on two pitches. That Castro and Osuna use three with regularity may have good implications on their future ability to start, as three pitches is often a requirement. If their fastballs are straight and aren’t as effective as their velocity suggests, Castro and Osuna each have two others pitches to go to and in time they’ll find their optimal mix.

So far, we don’t know how good Miguel Castro and Roberto Osuna are as relievers or if this experiment will be worth it. But we have a rough idea of what their production profile looks like. It will be interesting to monitor their appearances throughout the season and check back in at the stats around the All-Star break.