This is Likely RA Dickey’s Last Year in Toronto 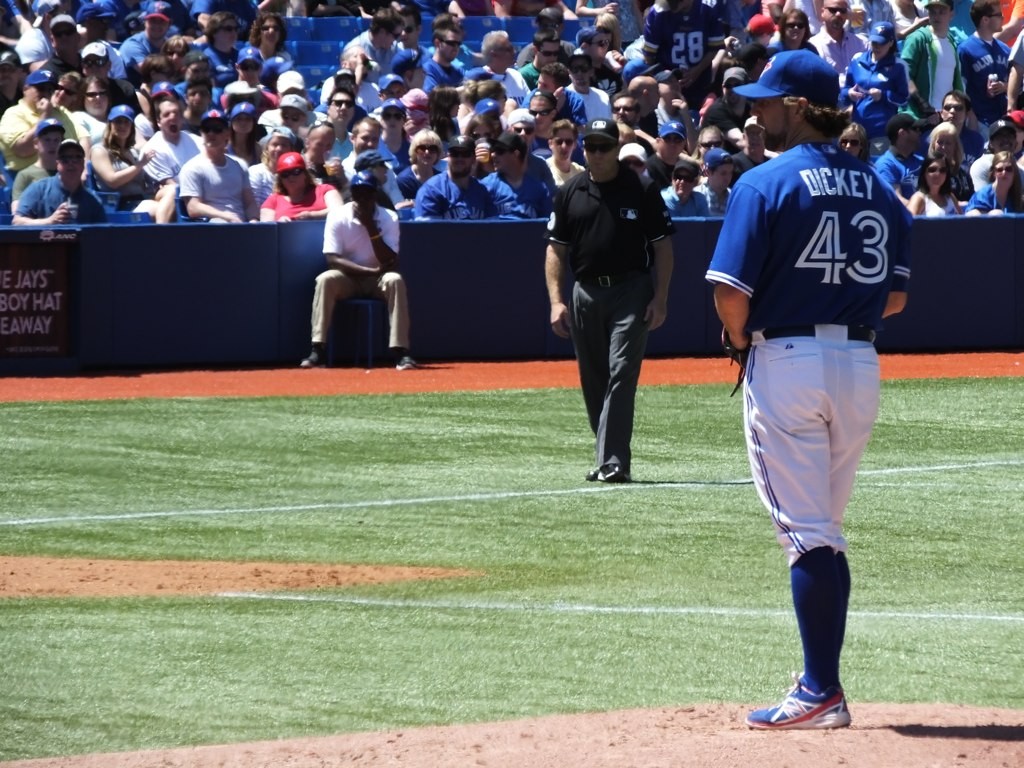 RA Dickey’s situation points to this being his last year in Toronto.
Photo credit to James Cullen (https://www.flickr.com/photos/[email protected]/)

RA Dickey has been quite the enigma since arriving in Toronto over two years ago. The Blue Jays entered the 2013 and 2014 seasons with mountains of hype, and given his pedigree and the huge prospect cost paid for him, Dickey was expected to step in as the team’s ace. That didn’t happen.

Some have tried to paint Dickey’s time here as a quiet success or at least a tolerable outcome, but while Dickey has pitched well enough to stay in the rotation and regularly pitch deep into games, his performance has not been exemplary and the trade that brought him north already looks bad.

This piece isn’t a critique of Dickey though or of Alex Anthopoulos. Dickey seems to believe that his 2012 success is right around and the corner and he has remained dedicated to realizing his potential throughout his Blue Jays career. At the time of the trade, I was uncomfortable with moving both Travis D’Arnaud and Noah Syndergaard, but the Blue Jays position on the win curve made it justifiable and many leading opinionators said as much. Every expected additional marginal win the Blue Jays could capture prior to the 2013 season was worth much more than such wins years down the road.

Dickey’s value can’t be fully illustrated by his summary statistics due to the knuckleball hangover effect he imposes on batters and the fact that he has perhaps caused the team to overuse Josh Thole, whose bat has been truly dreadful with the Blue Jays. He probably is a net positive in terms of less-tangible effects. His tangible value, which describes the impact of events that happened with him on the mound which are demonstrably skill linked, paints the picture of an average to below-average pitcher who has soaked up a ton of innings. Dickey’s fWAR/30 starts with the Blue Jays is 1.2.

fWAR is FIP-based and there is some belief and evidence that knuckeballers can suppress batted ball quality to a noteworthy extent, so perhaps RA-9 would more fairly measure Dickey’s value. I am always hesitant to reference RA-based value metrics for pitchers since pitching is only one component of run prevention and so wholly assigning runs to the pitcher is misleading. However, from a purely value-extracted perspective it can make sense. Dickey has been worth 2.0 wins/30 starts by RA9-WAR. ERA- had him at 102 in 2013 and 94 in 2014. He has been a relatively average starting pitcher in terms of the opposition scoring runs while he’s been on the mound.

Perhaps the less tangible effects and durability make him a little above-average as a starting pitcher with the Blue Jays. That is nothing to sneeze at, although being paid $30MM from 2013-2015 makes him fairly neutral as an asset: averaging fWAR and RA-9 gives 1.6 wins per full season and $6.25MM/win. The current market rate for a marginal win is only slightly higher (differing methods reveal the number to be around 6-8).

Going forward, we can’t expect Dickey to improve — it would be foolish to think the window for Dickey to return to his Mets levels is still open. He is 40 years old and no longer consistently throws the hard 80 mph knuckleball that supposedly made him distinct from past knucklers. A common trait of knuckleball pitchers is that they age slowly, and Dickey’s lack of an ulnar collateral ligament may allow him to age at an especially different rate. However, Dickey’s body is still aging and at 40 years old, he can’t do the same things he did a few years ago.

It would be unrealistic to expect him to continue being an average pitcher in the future and he has seemingly been a different, worse pitcher in 2015. This year, Dickey has been wholly awful: -0.3 wins by both fWAR and RA-9 WAR. A 121 xFIP- is his worst in a season since the Rangers days. Fangraphs Depth Charts, which aggregates ZiPS and Steamer projections, foresees 1.0 fWAR from Dickey rest-of-season. That is, the leading public projection systems believe his true talent level is that of a below-average pitcher. My FRIAS system, which only takes into account his 2014 peripherals, agrees, saying Dickey is a 4.29 FIP guy.

To be worth $11MM next year (the salary he’d be due less the buy-out, which is a sunk cost), Dickey would need to be expected to produce around 1.6 WAR, assuming a $7MM/win figure. He would need to fundamentally change for the better over the next few months for that to be a reasonable projection. The Blue Jays have had trouble at the back of their rotation in recent years and it may be tempting to say that the sheer number of above-replacement innings Dickey can throw is valuable to the Blue Jays at a level that exceeds his WAR totals, but the team has a lot of money leaving the books this offseason and will have many other options to consider. This isn’t an argument about Dickey vs. standing pat. There will likely be many better ways to spend the $11MM on this offseason and as a result, the Blue Jays will likely find it advantageous to decline his team option. Dickey could certainly return at a lesser commitment, but I wouldn’t be surprised if he rules out returning to Toronto in an open market scenario.