Home » Analysis » How Accurately Can We Predict a Hitter’s Strikeout and Walk Rates?

How Accurately Can We Predict a Hitter’s Strikeout and Walk Rates?

Plate discipline is a crucial skill for every single major league player. Being able to lay off of bad pitches, make contact, and control the strike zone are skills that provide the foundation for some of the game’s best players to be great. These skills manifest themselves through important stats like strikeout and walk rate. If we could predict, with a reasonable degree of accuracy, how often a hitter walks or strikes out as the product of skill-based rates, we would open another window into player talent.

This article is my first attempt at mathematical analysis, and I would appreciate constructive criticism in the comments. Data used includes seasons with the minimum number of PA for the modeled statistic to stabilize (Reference: Rate at which K% and BB% stabilize) from 2002-2014 from all non-pitchers. With the size of this data, the possibility of overfitting is reduced. All statistics are through June 18, 2015.

At first glance, the chart seems to produce a fairly reasonable result; if you don’t swing at bad pitches and make contact, you’re less likely to strike out. 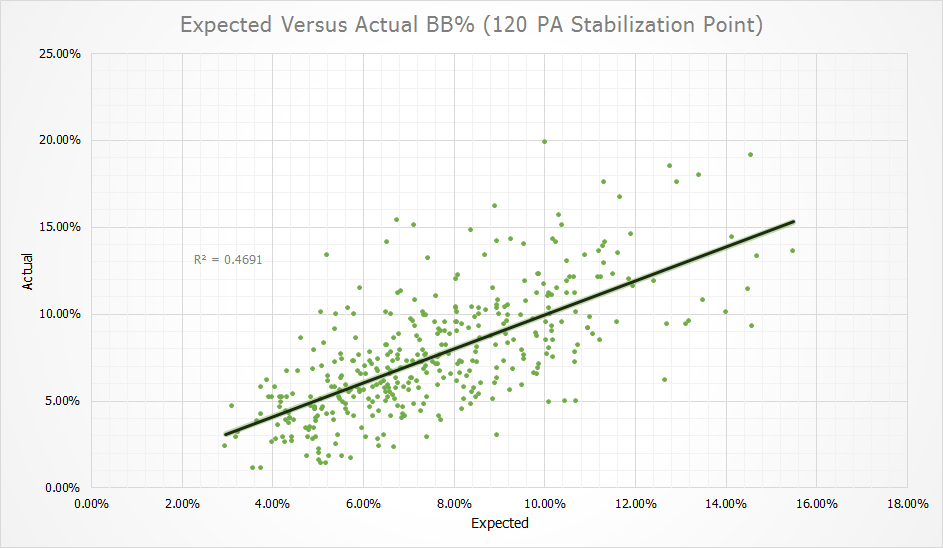 Again, fairly reasonable. If you can control the strike zone by fighting off pitches and being disciplined with when you swing, you’ll walk more.

This data has shown that in the past, players who excel in these plate discipline statistics boast better walk and strikeout rates. If this information proves to be predicted, we can believe that players with xK% higher than their actual K% are likely to strike out more, and vice versa based on these underlying statistics remaining similar, and players with xBB% higher than their actual BB% can expect to walk more, with the opposite being true as well. Here is my full set of data:

As we can see, some prominent MLB hitters could be looking at an uptick in strikeouts, such as Hunter Pence and Justin Morneau. As well, former Blue Jay Emilio Bonifacio and Tampa Bay Rays slugger Steven Souza have been getting “unlucky” with their strikeouts, and could see a decrease in the near future. Meanwhile, xBB% is not buying into two of the better hitters in the league right now, predicting Bryce Harper and Miguel Cabrera for sharp downticks in walk rate, whereas it predicts Geovany Soto and JJ Hardy to be among the players who could see a few more walks come their way.

Next up, Breaking Blue will take a look at xBABIP.