The Blue Jays entered the 2015 season with Aaron Sanchez in their rotation, in large part due to Marcus Stroman’s devastating knee injury. That injury and the one to Michael Saunders triggered what became a confusing time for Blue Jays fans. What seemed a very promising team entering Spring Training was reduced to one that, according to pundits and projections, was around a .500 squad. The Blue Jays have since beat and re-wrote those expectations as their set of position players has near-uniformly met or exceeded what was expected of them. The rotation struggled in the first half of the season, doing so amid numerous ups and downs. The team memorably entered the year with six rookies being given important roles and within a couple months it became fairly clear which had sunk and which had swam. Roberto Osuna, Kevin Pillar and Devon Travis looked look actual major league players at that point, and here in mid-August the team is still happy with their production.

Aaron Sanchez and Daniel Norris figured to fight for a single rotation spot in Spring Training, but Stroman’s injury afforded both spots. They pitched poorly as starters in terms of defense-independent numbers. Sanchez walked only a few less batters than he struck out en route to a 4.58 xFIP as a starter, while Norris as a Blue Jays starter (he, of course, has since been traded to Detroit) pitched to a 5.44 xFIP. What happened with Daniel Norris in the minor leagues last year, when he zipped up the chain while striking out just about everybody and displaying good control, has yet to be replicated in 2015. Sanchez was given more leeway than Norris as a major league starter, perhaps because his ERA was being kept in check as he managed to avoid paying for the usually-costly extra bases and lack of strikeouts. Sanchez’s ERA as a starter was 3.55, but that could not at all have been expected to continue and the organization was smart to assign him to the bullpen after he reemerged from a lat injury.

Sanchez is essentially a two-pitch pitcher whose fastball is usually of the two-seam variety. His curveball was always well-touted as an amateur and professional prospect and it was assumed that it would become a great strikeout pitch for him. A Google search reveals how his curveball has often been cited to be improving, or that he’s changing the action on his breaking ball (for example, earlier in the year there was talk he was developing a slider). But he hasn’t really thrown many pitches tagged as sliders and the curveball’s results have not been good. He’s only getting swinging strikes on 10% of curveballs (league average is around 11%) this season (a 180 pitch sample), and that is in infrequent use. He saves it for special occasions and doesn’t get great results in those windows. The two-seam looks to be a better pitch than his four-seam, and he throws it very often. I have a feeling that the Aaron Sanchez of five years from now will have a completely different pitch mix. He’s still figuring stuff out and could benefit from trying different types of breaking balls and changeups. It’s possible that the curveball has been getting bad results because he hasn’t been able to command it properly or able to set the pitch up by getting into good counts and burying it below the zone.

Since returning from his lat injury, Sanchez has pitched well out of the bullpen, as he did last year in 33 innings. As a reliever, something seems to click with him, seemingly more than it does with the average starter-turned-reliever. He’s still not getting swinging strikes as a reliever, curious since that is generally the hallmark of great relief weapons. By dialing up their fastballs and constricting their arsenals, relief pitchers are generally able to better attack hitters and pump up their swinging strike rates. Swinging strikes lead to strikeouts, and the strikeout of course is a very efficient way to get an out. Sanchez can throw his fastball even harder out of the pen, but his improvement as a reliever seems to come from an even more extreme ground ball rate and a suddenly-existent strike-throwing sense.

It is clear in Sanchez’s 43.1 relief innings that as a reliever he approaches batters in a different fashion. That is what this article is about. I am skeptical of Sanchez’s performance as a reliever and wanted to better understand what is happening when he takes the mound in relief.

This article relies on research I did with counts and the strike zone. I’ll likely be expanding this research into something broader, since I believe that looking at zone rates (the rate at which a pitch is in the strike zone) by count is a potentially useful approach to evaluating control and command. Zone rate in the aggregate (on all pitches) is not a useful statistic because one pitcher can quickly get ahead of a hitter and try to induce strike-three chases, and end up with the same zone percentage as a second pitcher who is trying throw a strike with every pitch since he often falls behind. Every pitcher ends up around 48%, with the exact number depending on what zone dimensions are used.

I’ll be using a zone that is 1.678 feet wide and extends from 1.5 feet off the ground to 3.5 feet. The Pitchf/x operator designates an upper and lower bound for the strike zone, which can be used in evaluating the zone later, but those values are of questionable quality, and other sites (notably Brooks Baseball) go with a constant 1.5 feet – 3.5 feet zone, so that’s what I’ll use here. Any reasonable zone will produce the desired results for what we’re doing here. 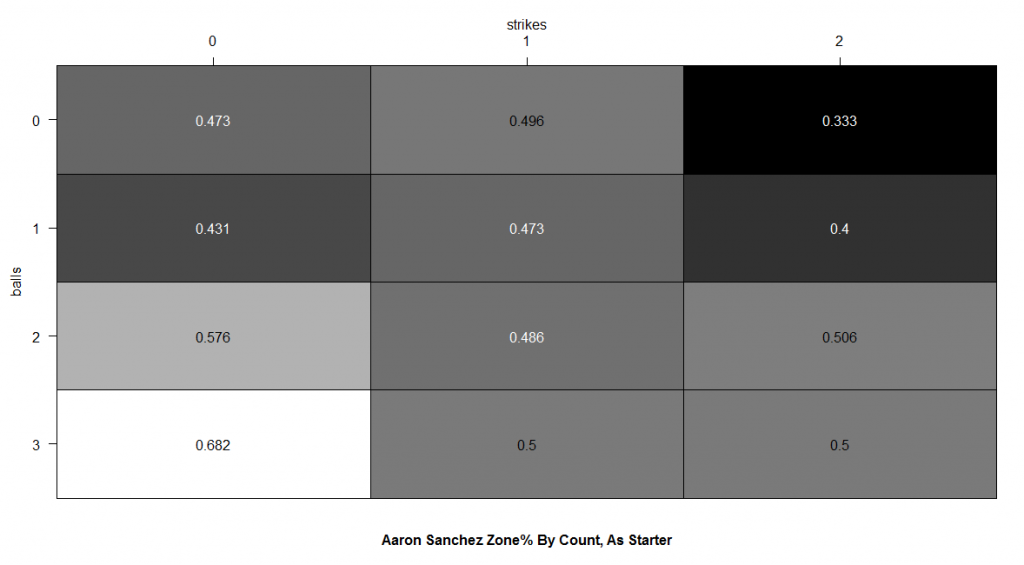 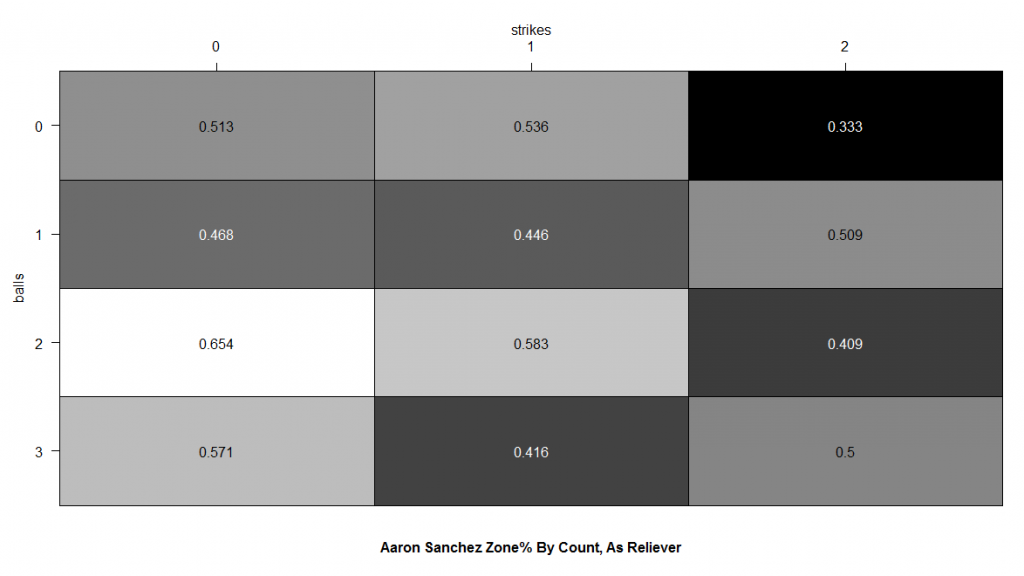 To make the differences easier to see and digest, here is the same information but with the rates overlayed; displayed numbers are the relief rate subtracted by the starting rate. Green boxes indicate a significant edge in zone percentage in relief, blue the opposite. 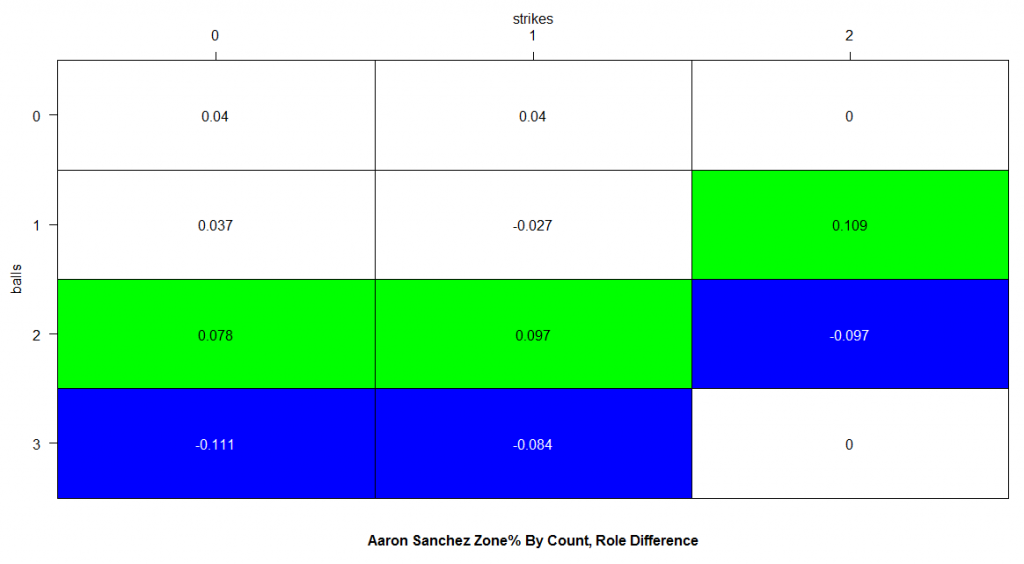 When down 2-0 and 2-1, Sanchez has been more aggressive in claiming that first or second strike, presumably being wary of entering a three-ball count. In 3-0 and 3-1 counts, (which Sanchez would enter more often as a starter, as he is less likely to throw the ball in the zone at 2-0 or 2-1), Sanchez as a starter throws the ball in the zone much more often, more eager to avoid the walk.

This data isn’t that loud, perhaps not as loud as I expected. Sanchez has thrown more balls in the zone early in counts and in slight hitters counts, as a reliever. But he’s not completely selling out his pitch quality to toss the ball over the plate on neutral, early counts like 0-0, 0-1 and 1-0. The ~4 percentage point edge in those counts is a real amount (especially since the sample of pitchers is larger earlier in the count — every plate appearance reaches 0-0) though and he does seem to be a more aggressive pitcher out of the bullpen.

Aaron Sanchez does approach pitching differently as a reliever but, of course, most pitchers do. And by just looking at Sanchez’s zone rates changes by count, it’s hard to put the raw numbers into context. As a next step, I’d like to look at all pitchers and their zone rates by count. This includes looking at specific pitchers and how their count-adjusted zone rate correlates with walk rates (in that season and in future seasons), and how the typical reliever uses the count when compared to the typical starter.

There are reasons to believe that Aaron Sanchez has amended some of the control issues that have followed him around, or at least is able to as a reliever. Many people (including John Gibbons, the Toronto media and presumably the Blue Jays front office) believe Aaron Sanchez the reliever does not have control issues and is a shutdown relief option. I’m not quite convinced and believe that there are other relievers on the Blue Jays who should also get eighth-inning looks (Liam Hendriks, Mark Lowe and Brett Cecil project better). But, something is happening with Sanchez and his will be an interesting story to follow as the stretch run intensifies.

Can Justin Really Smoak It?
Kevin Pillar Is What We Thought He Was, And That's Okay