Can Justin Really Smoak It? 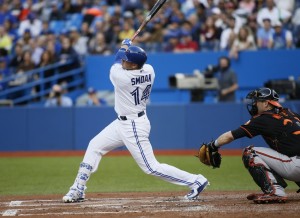 Originally noticed by scouts who were initially looking at his teammate and friend, Matt Wieters, Justin Smoak became a top 5 rated talent in the 2008 draft due to his ability to hit and hit for power. Taken 11th overall by the Rangers, Smoak continued to impress in the minors with his bat, being ranked by Baseball America in the Rangers organization in having best power, best strike zone discipline and best hitter for average. He was so highly regarded that he was the main piece in the Cliff Lee trade from Seattle to Texas.

Looking at his Major League career so far, it has been a disappointment in terms of his ability. It is fair to wonder where his ability to hit and hit for power went. In actuality, it may have not gone anywhere. Popular stats such as batting average do not reflect well on Smoak, career .224 hitter, however some advanced peripherals tell a different story.

Hard% measures how hard the ball has been hit and while there is no guarantee that a hard-hit ball will fall for a hit, it is more conducive to success than a weakly-hit ball. Over the past 5 years, Smoak’s Hard% has increased:

In 2015, for players with at least 200 PA, his Hard% is good for 27th in the league, ahead of bashers Nelson Cruz, Prince Fielder, Tood Frazier, Joey Votto and teammates Josh Donaldson and Jose Bautista.

Smoak’s batted ball distance has also increased each year since 2011: 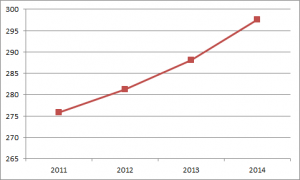 For his career his 0-Swing% has been 27.5% and steadily declined over the past 3 years.

He is chasing less pitches outside the zone, but mind you there is understandably some discrepancy in this data as in 2013 he had nearly twice as many PA as 2014 and 2015.

While playing the majority of his career at Safeco Field, a pitcher-friendly ball park, Smoak has met or outperformed his expected HRs, xHR vs actual HRs.

Smoak’s defense has also brought value to a team whose previous first basemen were a tandem of Edwin Encarnacion and Adam Lind, both of whom rated as below average to. While he may still split duties with Edwin, he has been brought in as a pinch defender late in the games often for the Jays. UZR/150, which is Ultimate Zone Rating scaled to a full slate of games for a season, has him as an above average defender this year at 7.2. That is better than renowned gold glove winners Eric Hosmer, Adrian Gonzalez and Mark Teixeira.

Justin can Smoak it and there may be some untapped upside in his bat. He may never win a batting title, but he could be a league-average first basemen or better whose production comes from stable skills. There is value in that.