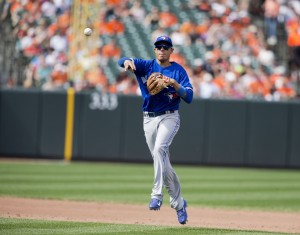 Photo from Keith Allison on flickr (labeled for reuse via Google Images).

It’s likely that your fantasy baseball season is over, but your league is still active. If you’re looking for offseason assets or potential keepers who could contribute in 2016, consider these names.

Robinson is a target for thin rosters in deep leagues. He’ll carry duel eligibility at 1B and OF next year, which will be his age 31 season. Robinson has a .350 wOBA this year in 291 PA, with a normal looking BABIP and very solid K and BB rates. In his extensive minor league career he had a .208 ISO, so he probably has a bit more true talent pop at the MLB level than he displayed this year (.147 ISO). Washington will be relying on two injury prone veterans at LF and 1B in 2016, Werth and Zimmerman, so playing time opportunities could be abundant for Robinson, especially if Denard Span walks and Michael Taylor becomes the starting CF, rather than a bench player.

Catchers that run are rare animals, and Realmuto has 7 steals in 423 PA this year for Miami. Last year he stole 18 bags in AA. He also has an impressive .150 ISO, with 10 homers, while playing half of his games in spacious Marlins Park. Realmuto is a legitimate young catcher who will get a starter’s workload and could conceivably OPS over .700 next year. Depending on the depth of your league, he could be an asset worth scooping up before the offseason.

Since landing in Arizona part way through this season, Castillo has clubbed 17 home runs, good for a .280 ISO and a .381 wOBA. His 19 HR on the season are tied for 3rd for MLB catchers, behind only Martin and McCann, and he’s done it in just 335 PA – over 100 less than his closest peers. Castillo has always had a decent offensive profile for a catcher, and in Arizona he should be one of the best hitting catchers in 2016.

Lamb was a very interesting 2015 sleeper who had his season derailed by injuries. Two years ago in AA, Lamb had a .419 wOBA and 162 wRC+. The year prior in high A, he had a .424 wOBA, good for a 156 wRC+. Those are monster prospect numbers, and his age vs. level was appropriate at the time too. He held his own in 346 PA this year, but had issues translating his minor league power to the big leagues. He’ll still be only 25 next season, so look for him to make some power gains and rank favourably on the 3B landscape. Add him now if you can. 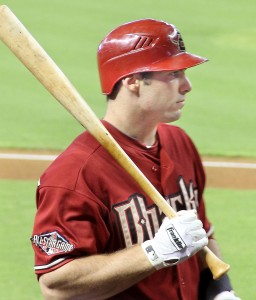 This isn’t Jake Lamb – it’s Paul Goldschmidt. Once upon a time he was a fantasy sleeper, though.

From Parra, to Pollock, to Peralta – the Diamondbacks aren’t good at much, but the organization has a knack for turning guys who look like fourth outfielders into legitimate players. Peralta is a good player story. He was a bad minor league pitcher for two of his teenage years in the St. Louis organization, but came back to the game as an outfielder through Independent baseball in his 20’s. Peralta doesn’t have Pollock’s SB potential, but he does have a hit tool, strong projections, and a .200+ ISO right now in 2015. He might be available if your league isn’t super deep.

(Bonus Arizona OF – think about Ender Inciarte too, especially if you lack SB).

Coghlan was actually a better hitter, all things considered, last season, when he posted a .353 wOBA for the Cubs. But this year his fantasy counting stats have ticked up, and he’s gone 16/11 through 465 PA. He platoons a bit, but he hits from the correct side of the platoon for fantasy purposes (the left side), and the Cubs offense is quite good now so if Coghlan is in the lineup frequently in 2016 and hitting near guys like Schwarber and Rizzo, the runs and RBI totals should be decent too.

Tucker has a 108 wRC+ in 302 PA this year at the MLB level. The 25 year old consistently hit for average and power in the minor leagues, with solid K and BB rates at all levels. It’s easy to be reminded of Kole Calhoun, a past sleeper success story. Colby Rasmus is a free agent this winter, so Tucker could end up as a starter in Houston’s OF next year. Even if he platoons in 2016, he’s left handed, which is the good side of the platoon for fantasy purposes.

JBJ and Hicks are two very similar stories. Both are former top OF prospects that struggled mightily at the MLB level in their age 23 and 24 seasons. If you’re in a dynasty league, these two were probably drafted as prospects but dropped some time before 2015. This year, Hicks has finally cut his K rate down to a respectable level, and he’s accruing counting stats at a 20/20 pace. JBJ has been more than respectable, with a .274 ISO and .379 wOBA in his 1/3 of a season. The strikeouts are still a bit concerning for Bradley Jr. (29.5% K rate), but his minor league track record speaks to someone that has good plate discipline skills, so maybe he can make gains in that area. Consider these two post-post-hype sleepers if they are free agents.

The middle infield does not have an abundant amount of 2016 sleepers. Players like Panik and Crawford have been far too good this year to consider them as sleepers, and good young performers like Odor and Lindor have too much prospect pedigree to be sleepy. Here are a few possible sleepers though:

Logan Forsythe – has had a strong offensive season in Tampa Bay, and could be a 2B sleeper in your league if he’s somehow gone unnoticed. He was a 2015 sleeper though, so he was probably scooped up in deeper leagues.

Jedd Gyorko – Mo money mo problems, amirite, Jerko? Jedd, big contract in hand, will still be just 27 years old next year, and he sneakily picked up SS eligibility this season for some leagues, which means he’ll have it in 2016. The offense bounced back a little bit as well, with 14 homers in 396 PA so far – that’ll play at SS, in some leagues. In terms of skill, he’s still essentially the same dude that clubbed 23 homers in 2013.

Brad Miller – Miller is an under-appreciated player who has been effective and productive in every season, yet the dysfunctional Mariners can’t seem to just leave him the **** alone at shortstop. Even if he’s an OF next year, he’ll be SS eligible for fantasy. He has slashline talent and 15/15 upside. He projects to be a league average hitter, which will play at SS in lots of leagues.

Marcus Semien – he has a broad offensive skill set, but his numbers were probably affected by his huge, much publicized defensive struggles at shortstop this year. Give him a mulligan for 2016. There’s OBP and 20/20 upside here, I swear.

Cesar Hernandez – he could start at 2B for the Phillies and steal some bases, I guess? In the minors, he hit (almost) .300, with a couple of 30+ SB campaigns. Could be useful in 5×5 leagues.

For SP and RP sleepers, stay tuned for something by Spencer in the next day or two.