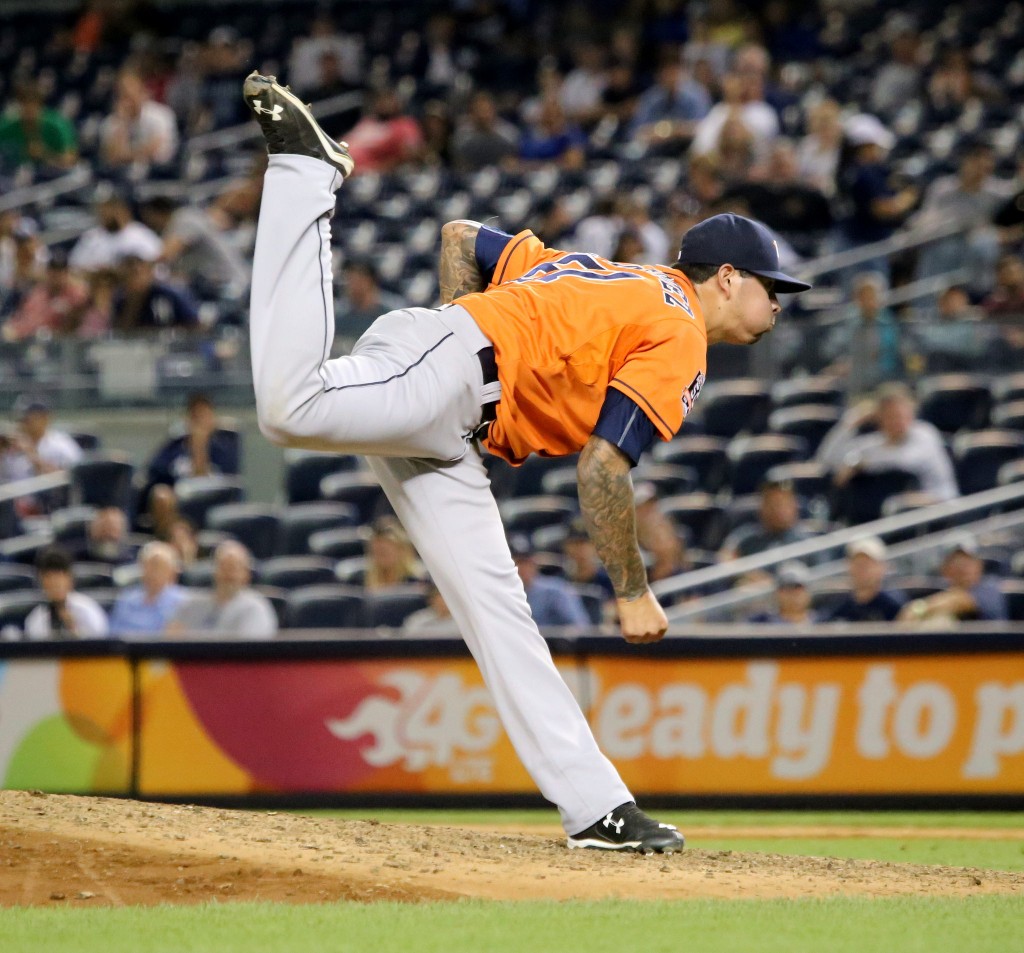 On Friday, Nik published an article that included some good sleeper position players to target going forward. Here is its pitching counterpart. These are some pitchers who for some reason or another, either statistically- or scouting-based, I like at a level that far exceeds what is perceived to be their value. Many sleeper lists are a mix of hot prospects who should be called up by June; I wanted to dig deeper than that since it’s easy to figure out which prospects could come up and many of them end up becoming too trendy.

I ended up finding six starters and two relievers who fit my sleeper profile. Their relevance differs by league type, so I included what kind of pitcher I think each could be in 2016.

A 2010 second-round pick of the Astros and a 2011 Tommy John surgery patient, Vincent Velasquez seems to have flown under the radar his whole professional career, probably because he didn’t pitch a real season until 2013, at which point his draft hype had dissipated. But he really has exploded onto the scene post-recovery, dominating the minors until his call-up this season. Velasquez posted 10.8 K/9 and 3.1 BB/9 in the minors at age-appropriate levels and he has huge stuff: his fastball has averaged 94.4 mph over 17 major league appearances (7 starts) and both his fastball and breaking ball are getting very good swinging strike rates (a decent 10.6% over all pitches).

Scouts do like him a fair bit too, as Baseball Prospectus ranked him 75th among prospects entering the season. In the majors he has shown a fly ball profile (30.1% GB%) but his minor league batted ball mix was more tempered. I don’t see any reason that Velasquez cannot become a #2/3 major league starter in relatively short order.

Early in his prospect career, Jimmy Nelson posted some very poor walk numbers, but since the start of 2014 control hasn’t really been an issue for him. That has led to his entire production profile taking off. Nelson sits mid-90s (averaging 93.3 mph on the fastball this season) with a very good slider that he uses conservatively. He’s a 26-year-old pitcher who for his 256.2 inning major league career has fallen just short of the league-average rates for strikeouts and walks and gets above-average ground balls.

Right now he may not be a top-of-the-rotation starter, but if he is able to use his stuff to improve his strikeout rate or further improves his control, we could have one on our hands here. The skills are all here, including a great durability record: Nelson has made 140 pro starts without major injury and has a good build. He’s probably a decent #4 starter right now and could be something more.

It’s hard to get a grasp on what Raisel Iglesias is because of a lack of information. He didn’t get that much hype after leaving Cuba and entering the international market in 2014, but the Reds did give him a whole bunch of money ($27MM over seven years) and he entered the season in their rotation. And he’s been really good! Early in the year he seemed to have trouble turning a lineup over twice and getting through a full start, but he’s really turned it on down the stretch and has some great seasonal stats in 95.1 innings (includes 16 starts): a 3.29 xFIP and 11.7% SwStr% that includes good rates on four different pitches that he uses regularly.

There is a good chance that Iglesias is still flying under the radar. Steamer projects him for a solid 3.62 ERA (which includes a mix of starter and reliever innings). The Reds figure to keep Iglesias in their rotation long-term and he could be a #3 starter immediately.

One of the two key prospects Washington received last winter for Steven Souza, Joe Ross had an amazing start to his major league career. Over his first nine starts, posted a 13.4% SwStr% led by a deadly slider and out-pitched some of the team’s much more established pitchers (3.20 FIP, 3.18 xFIP). Over the past month or so, he’s taken a step back (and was recently moved to the bullpen, partially a function of his innings total) but his seasonal numbers are still promising. Joe Ross is a 22-year-old starting pitcher with two real weapons (fastball, slider), a history of decent control and a ground ball mix. It’s all there and he should get a full rotation spot next season, as the Nationals figure to bid adieu to Jordan Zimmermann and Doug Fister. Expect a #4 starter and be hopeful of more.

Jeff Samardzija is having an absolutely awful year. That much is clear. He’s not preventing runs or generating events that tend to prevent runs. All measures of value say that this season has fallen well short of expectations for Samardzija. He has presumably cost himself tens of millions of guaranteed free agent dollars. But there are still skills here, Samardzija isn’t hurt, he’ll presumably be in a new situation next year and he’s only 30 years old. It really wouldn’t be surprising at all to see Shark make a complete bounceback in 2016.

What I find helps explain his poor 2015 is the sudden drop in splitter swinging strike rate. After years of 20+% effectiveness, the pitch sits at 12.8% this year. He traditionally uses the splitter to get strikeouts and this year it hasn’t done that when he throws it with two strikes. Perhaps that is putting pressure on Samardzija’s whole profile and forcing him into a transitional state. Or it could be nothing. In any case, he’s averaging 94.2 mph on the fastball this year and is still displaying great control. I think Samardzija is still a #3 major league starter and possibly more.

I’ve long liked Wade Miley and wanted to get him into this list because I think despite his stats not being as shiny this year and last, he is still an effective major league starter that you can count on for decent innings. At different points in his five-year major league career, Miley has displayed good strikeout ability, walk prevention ability, and ground ball ability. Just not all together in the same year. I don’t think he will ever mix them in the same year, but I do think that the pitcher he is now is productive in deep leagues. The positive batted ball mix is here to stay, making him a #4 starting pitcher and with some control refinement he could settle in a notch above that. 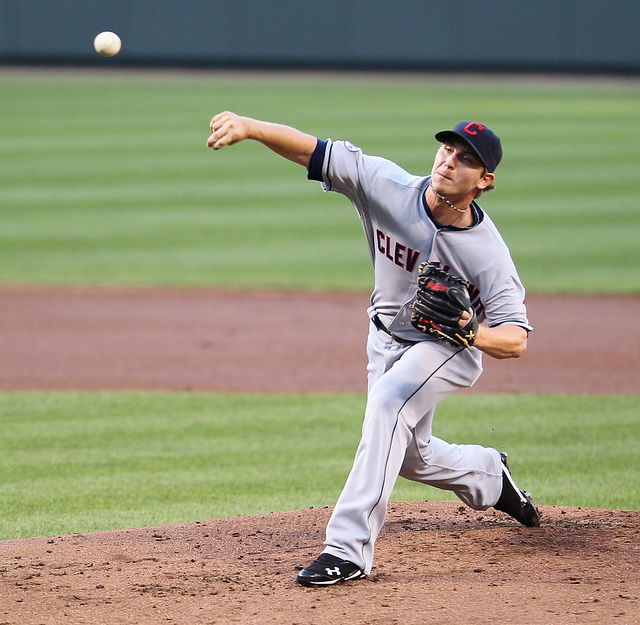 Josh Tomlin would have placed on this exact list before this season as well, but he spent most of the season on the shelf after undergoing shoulder surgery in April. It’s a shame, since Tomlin’s skillset is really something and there a good chance that he’s a productive starting pitcher. We just haven’t been able to see it. Tomlin is a different pitcher from the hapless soft-tosser he was in 2010-2012 for the Indians. His skills seem to take a big jump in 2014 (a 3.16 xFIP!) over 104 innings, but that was hidden by a 4.76 ERA and a fragmented run in the starting rotation. This year he has a 3.56 xFIP over 8 starts. Steamer believes he is a 3.78 ERA starting pitcher, which is very good for someone that most people wouldn’t consider in any format (or just generally never think about). Here is an interesting comparison that probably delves a little into hyperbole: two pitchers in 2013-2015 (304 innings for Lee, 161.2 for Tomlin).

Tomlin has Cliff Lee’s control ability and has displayed good strikeout ability over this sample. The fly ball slant and strikeout edge are what have kept Lee ahead, but then again nobody is expecting Josh Tomlin to be Cliff Lee! The point is that he has an elite skill and some semblance of other skills. Health is a big issue, however. Expect #3/4 starter production while Tomlin is in the rotation in 2016.

Despite his 2014 postseason missteps, Hunter Strickland is a very, very effective relief pitcher and the Giants seem to be finally trusting him. He gets ridiculous swinging strikes on his 97 mph fastball (16.5% SwStr% career for the pitch) and can locate it. San Francisco’s closer situation has been relatively fluid in recent seasons and Santiago Casilla isn’t that good. If Strickland does end up getting a shot at saves next season, he could run with it and not let go for years.

Looking for reliever sleepers is much different from starters since opportunity rules the day for reliever value, not talent. Relievers need saves and holds to keep up. There is no shortage of high-octane relief pitchers that are called up to the majors every year and there’s no point in highlighting each one. I wanted to highlight Greg Holland because it seems like he isn’t long for Kansas City’s closer job. Entering his third year of arbitration with a whole pile of saves, he will likely become too expensive for the Royals’ liking and they have so many other effective relievers waiting in the wings. Plus, he is having a very poor season by his standards and is quickly losing the confidence of his team. His fastball is averaging 93.6 mph instead of the usual 95-96. Cause for concern.

But I don’t think it’s curtains yet for Holland. He still does throw hard with a great slider, still has an amazing track record, and very likely isn’t really a 5+ BB/9 pitcher. Steamer projects him at a 3.09 ERA going forward and I agree that he’s likely still good and worthy of a closing job somewhere. His value will likely be heavily discounted entering 2016 and is a good buying opportunity.