With a loss at the hands of the Tampa Bay Rays, the Blue Jays finished the season 93-69, well above pre-season and pre-August expectations, but also well short of their BaseRuns and Pythagorean records. It’s been a great season all around for the club that won the 2015 AL East. And with the season coming to a close and the postseason roster and rotation being decided, I thought it would be a good time to look at a few themes that have shaped the way the season has played out and provide some graphs and analysis to go along.

It looks like the Blue Jays will go with a four-man rotation in the ALDS that includes Marco Estrada. I have mixed thoughts about Estrada. Entering the season, I expected him to be an interesting swingman who could passably make a dozen starts or so. A good safety net and given the presence of Justin Smoak and Edwin Encarnacion, letting Adam Lind go was fine. But following what is being termed as a breakout season, I’m somehow less intrigued by Estrada. What had interested me was his good walk and strikeout rates, the latter of which was backed by good swinging strike rates. This season he has disappointed in both areas, falling below his career rates and below the 2015 league-average K%-BB% (10.5% to 12.7%).

Suffice to say, Estrada must be beating his defense-independent pitching numbers in order to produce such a sparkling ERA as 3.13. He is, by a noteworthy amount. I compiled every pitching season of 150 IP from 2002-2015 and plotted xFIP and ERA. Labelled are seasons where ERA and xFIP disagree by more than 1.60 R/9 (data point is at midpoint of label). 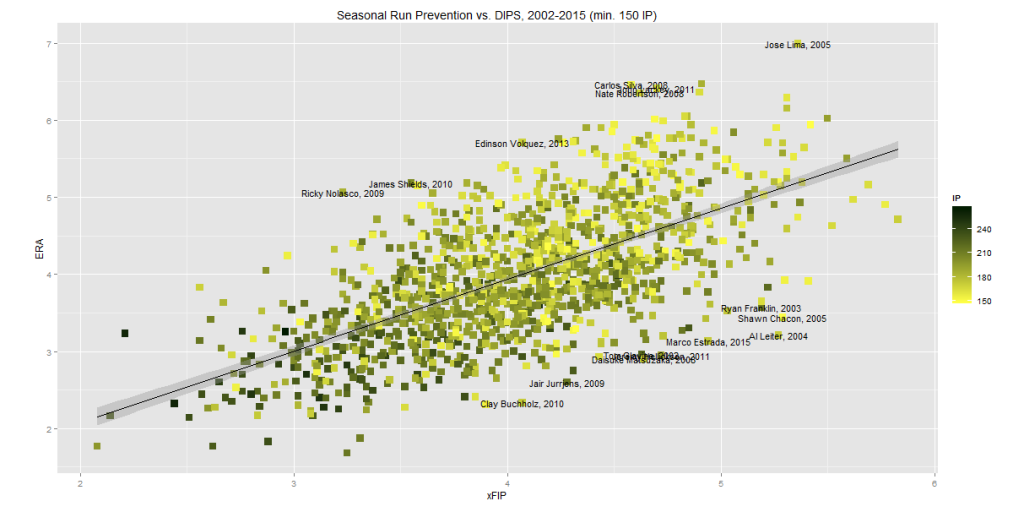 You can see Estrada in the bottom right portion of the observations, on the frontier of xFIP-beating seasons. To demonstrate that there’s not much reason to take his ERA-xFIP split at face value (i.e., buy into it as talent), I then found the subsequent seasons and their ERA-xFIP difference. I used a smaller sample for the second season, 50 innings, to lessen the effect selection bias has on this exercise. Here are the season pairs: 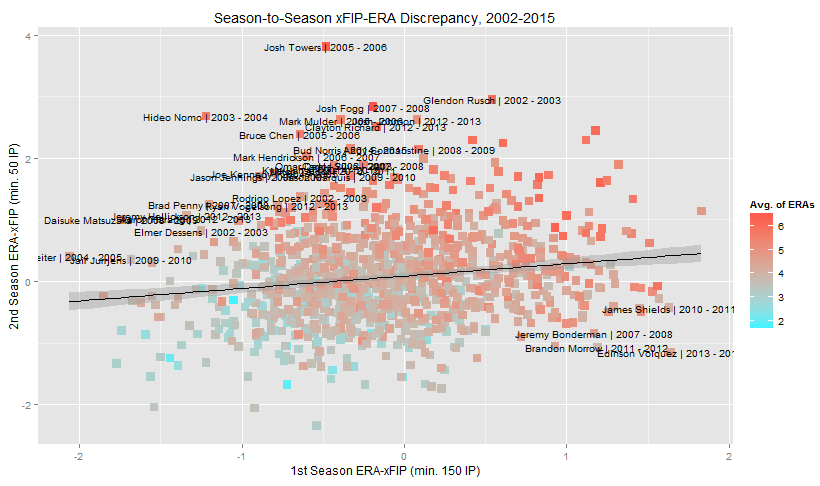 There’s not really a relationship here. The regression line suggests that someone whose ERA is 1.80 runs better than his xFIP, as Marco Estrada’s is, would pitch to an ERA around 0.20 runs better in the following season. For the colour, I did a simple non-weighted average of the two seasons’ ERAs so as to include all the information. The Blue Jays have fared very well while Marco Estrada has been on the mound. Whether he can keep this up is perhaps a different story.

If you’ve been following the Blue Jays season at any depth, you know that they’ve fallen victim to more than their share of close losses. In the first half of the season especially, the Blue Jays were dropping one run games left and right. Generally, one run games are regarded as coin flips. Blake Murphy of The Hardball Times looked at this a couple years ago. Even bad teams win about half of their one-run games. A team that has won or lost them at a rate that far differs from .500 is experiencing either good or bad sequencing luck. The 2012 Orioles were the most recent team to generate one-run game debates. They rode one-run victories to the wild card game, where they defeated Texas. And they show up prominently in this next plot, which illustrates where the Blue Jays stand among 1995-2015 teams. 1995 was the year after the strike that wiped out some of the 1994 season and postseason and signaled something of a new era. 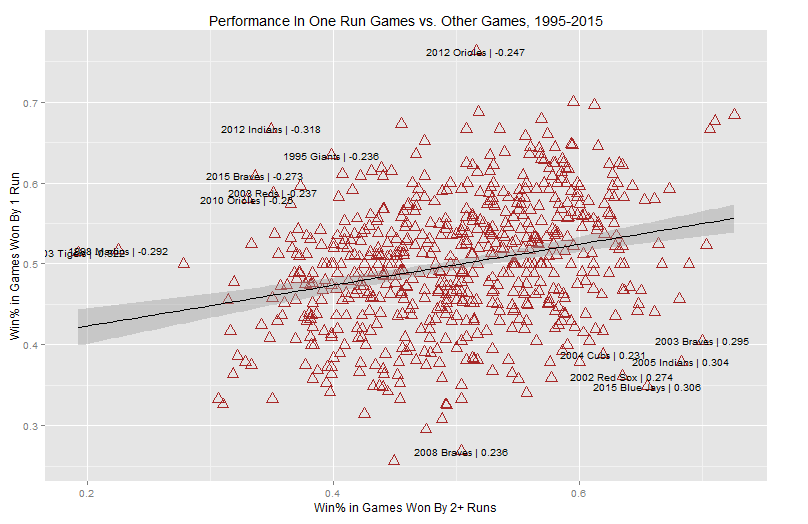 As you can see, the 2012 Orioles are way at the top. Teams with labels experienced differences of more than 23 percentage points. The 2015 Blue Jays are the closest team to the bottom right corner. They played really, really well in games decided by two runs or more, games that are generally decided more by talent, instead of circumstance. It’s kind of a miracle that the Blue Jays still managed to win 93 games, a testament to how good the team’s raw run numbers are: Fangraphs’ PythagenPat formula says the Jays played like 103 game winners, best in baseball by seven games. They scored many more runs than their opponents and that type of behaviour will help them in the postseason.

3. Kevin Pillar riding baserunning and defense to a 4 win season

Kevin Pillar had a fantastic season and, somewhat like Marco Estrada’s season, I don’t know how to properly contextualize it. He finished with 4.3 fWAR, which generally describes a first division regular or all-star. Pillar was very productive and covered up what would otherwise have been a real hole for the club.

How did Kevin Pillar do this? His value has come from baserunning and defensive value. He is second in baseball in BsR, Fangraphs’ all-encompassing baserunning stat. He is seventh in defensive value by Fangraphs (taking position and performance into account). Pillar produced 14.3 runs with his glove and 8.1 while on the basepaths. I collected from Fangraphs each 4.0+ win position player season since 1900 and compared defensive + baserunning value to batting value. Kevin Pillar’s season ranks 78 in the modern era terms of the amount his secondary production exceeded his batting production. 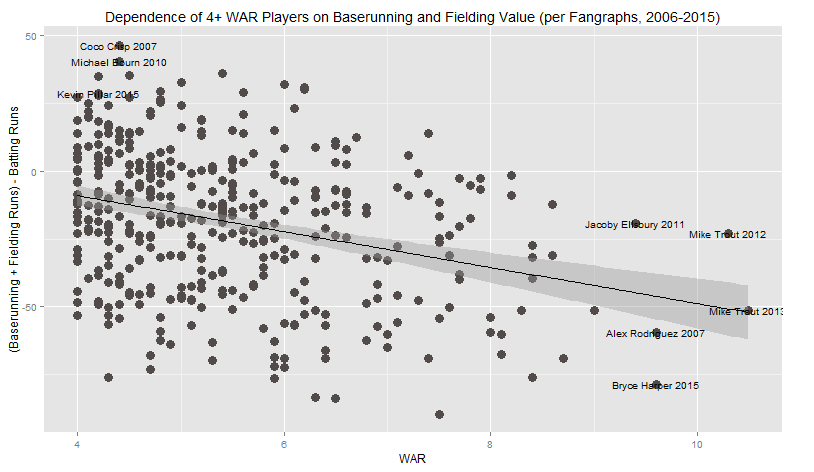 The y-axis is the number of runs for which baserunning and fielding runs (includes the positional adjustment) exceed batting runs. For most seasons, this is negative. Players can derive a ton of value from their bat. But there were also many positive seasons by this measure, led by Coco Crisp’s 2007. Kevin Pillar is also near the very top. He is having a productive season and it’s interesting to see how central baserunning and fielding value are to that fact.

There you have it. Three interesting things that presented themselves in the 2015 season that will be pertinent to look for in the postseason, which begins this Thursday against the Texas Rangers.