Major League front offices have had access to comprehensive StatCast data all season, data that describes essentially everything quantifiable about the movements of fielders, baserunners, batters and the baseball. Those of us in the public realm have only been privy to what’s released sparsely through MLB’s GameDay and At Bat applications. Baseball Savant, an invaluable resource for many things created by Daren Willman, has collected exit velocity and distance for most at bats, presenting it in the form of aggregate statistics for individual players. The data seems to be a little messy, as Jeff Sullivan found, but there’s enough of it that anomalies should be smoothed over enough to make critical conclusions.

At the same time, Baseball Info Solutions has been collecting data for contact quality and direction for every plate appearance since 2002, using manual data entry. Fangraphs recently shared this data on their site, providing information that should prove very useful in lieu of more detailed StatCast or Hitf/x outputs.

This article is my first foray into the new batted ball information and will present a fairly basic expression of expected isolated power. I looked at all hitters in 2015 with at least 65 at-bats of StatCast data and 100 plate appearances overall (all statistics through June 7th) and merged the datasets together to derive an appropriate regression. The good thing about isolated power is that it isn’t that dependent on things such as speed that are immeasurable with by this data. If I were to create a similar metric in the future to predict BABIP or more general measures of production, more datasets would need to be included to capture the additional significant player effects. 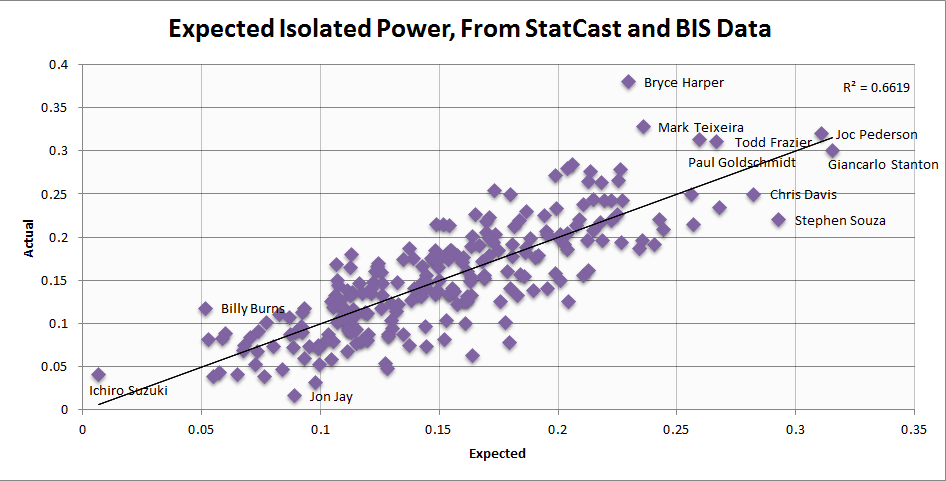 This chart shows a pretty tight fit. If you hit the ball hard, at the right angle and in the right direction, you’re liable to hit a lot for many extra bases. Some players stick out on the chart and I’ve highlighted them with labels. Bryce Harper has hit the ball very hard this year and has been rewarded. But he appears to be hitting above his means and doesn’t deserve to be running away with the sport’s ISO lead. Fifteen hitters have posted better expected isolated slugging percentages.

Taking this information at face value (as a legitimate metric that measures more talent and less noise than standard ISO), we could say that these players can be expected to perform closer to if not at their expected marks in the future. Players who have outperformed their expected isolated power have been lucky to generate so many extra bases given their contact quality, while players who have underperformed have been unlucky. Here is the full table, for reference.

The top five luckiest hitters by a straight spread are Bryce Harper, Mark Teixeira, Stephen Vogt, Nelson Cruz and Jose Bautista. They’re lucky but not bad: the average ISO of hitters in the sample is .152 while the average expected ISO of these five is .210. They’re still crushing the ball. Billy Burns, Russell Martin and Jason Kipnis populated the back spots of the top ten luckiest hitters and have below-average expected ISOs. They are players whose power production warrants concern going forward.

On the other side of the coin, two Marlins in Michael Morse and Christian Yelich are the only players to under-perform by over a tenth, while Marcell Ozuna has been the fifth most notable under-performer. A cursory glance doesn’t reveal any obvious patterns above over-performers or under-performers, and the Q-Q plot for the regression was normal.

Using new batted ball data to investigate expected peripherals seems like a worthy endeavour, something that Breaking Blue may explore further in future posts. An interesting idea would be to come up with expected measures for each fundamental peripheral (BABIP, ISO, K%, BB%) in order to produce an expected slash-line or composite stat such as wOBA.